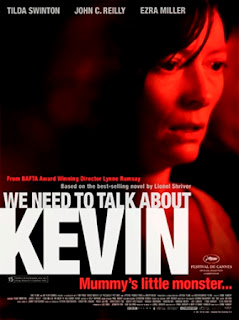 We need to talk about Kevin is a film based on a novel written by Lionel Shriver and directed by Lynne Ramsay. It tells the story of the mother of a teenage boy who went on a high-school killing spree and her attempt at dealing with her grief.

This movie is not your typical drama, you can't just watch it and not think things over at the end. It does have an impact on anyone, I presume, and it is shocking.

I haven't read the book, but I can tell you this movie is disturbing. One of the main ideas it gives you is the love a mother can/should have for her child, regardless his/her action. The innability of a mother to connect with her son in any level must be one of the most difficult, heartbreaking, frustrating feelings in the world. She must feel so useless, always blaming herself for not doing something right, for not trying enough. And I know some will rise and say "hey, she was so mean to him, so unpatient", but those persons don't really consider the mothers' point of view: why don't you try living with a child who doesn't listen, or just doesn't try to survive, a child who is so uncarring, and angry and just unreachable as Kevin. Any human being will be sick of it after a couple of weeks, months, so consider living with someone like this for years.

Also, seeing this movie would make you think "why is everyone blaming the mother, it's not her fault, she tried", but then again, think about from their perspective: they don't know how he was, what he put his family through; they would just see a weak mother who didn't raise her child right, who didn't educate him and, most importantly, a mother who didn't see this coming and didn't do anything to prevent it.

Kevin is...well, how can I describe him? A maniac?sociopath?pshycopath? I don't know the clinical term, but I can say that he doesn't have and he doesn't show affection to anyone; he is moody, angry and he seems bored of life, in general. He is the kind of boy you can't please- with the exception of bows and arrows- he seems to love that. 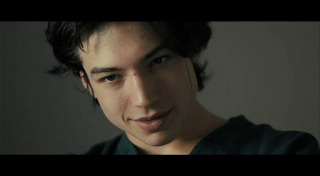 His relationships with others are strange and uncomfortable. A curious shift happens when the little sister is born- he is obviously jealous, although you can't help wondering why, since he hates his mother, but then again you have the scene of Kevin getting sick and you start wondering if there is something there, something hiding, since that night he showed the one flicker of affection he has for Eva- it troubled me and left me confused. Why? Why would act like that and then change back to his old self afterwards? Another peculiar incident is the one where he breaks his arm, but goes home and lies to this father, covering up the fact Eva threw him. The book probably explains those scene and I will try to read it soon!

The last scene revelead the shocking part, in my opinion. As Eva walks into her house, screaming her husband's name, I can't help saying "Please, tell me they are gone, that he decide to leave or something like that"- I really wasn't prepared mentally for the image of the garden, I couldn't believe that would happen. Even when I saw it, I refused to think that Kevin did it, I thought it was the other kids or other parents trying to revenge their loss. But unfortunately, the truth is sick, shocking, dramatic and heartbreaking- I admit I cried afterwards, as it doesn't hit you right way, as it didn't hit Eva either- you start feeling that true desperation when she goes inside and lies down on her bed, full of blood.

It is a kind of movie (and probably book) based on character development, not plot, which I like and enjoy more, sometimes. You can see, feel, understand and sympathize with them and so the story seems more real. It might get boring, if you don't like these types of movies, be warned.

Moving on to the film making part, I can say there are some beautiful, well-crafted moments in the movie that made it even more special. The abundance of the colour RED, from the opening scene, or the paint on her house, or constant bottle of wine sitting on the table, to the blood at the end. The sound effects and editing who create the dramatic feeling throughout the piece- from small noises(xerox machine, radio) to the sound of the girl singing- everything fits in perfectly and multiplies the effect. The directing is interesting, a little confusing at times, but still offers some memorable scenes. The Halloween moment when you actually see and understand the contrast between Eva and others, between what they are doing and feeling and what she is going through.

Performance-wise, I guess there is no need to say it, but I will anyway, just to inforce the fact that Tilda Swinton truly is fantastic in We need to talk about Kevin. She is a very interesting person off-screen, so I can understand the casting, but nonetheless, she delivers a moving, sincere performance and deserves all of the credit she is getting lately. Another stand out was, of course, Ezra Miller; his appereance helps make 80% of the job seem easier, as he has the look of a dangerous, deranged boy. John C.Reilly, always the  overlooked, underappreciated man of the Hollywood scene, has good chemistry with the two leads, but, as usual, never really shines.

Overall, it is a disturbing, yet amazing film that you should see!
Posted by Diana at 10:40 AM