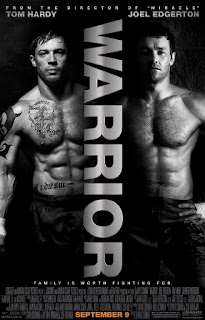 Warrior was an extremely pleasant surprise for me! I knew it would be good and I have read so great reviews about it, but only today I realised its greatness!

The film is a drama about two brothers separated at a young age by the tumultous relationship of their parents, who reunite after many years at an MMA tournament.

Nick Nolte plays Paddy Conlon, the sad, miserable, remorseful father, who was to cope with the thought of losing both of his sons and his wife because of his drinking problem. During the film, he is constantly trying to reconnect, to show his boys that he has changed, in any way that he can, but most of the times, the pain he caused it's too big for it to be penetrated by love.

At the beginning, where we see him sober for 1000 days, he finds Tommy, the younger brother, at his door, and soon enough starts training him for the MMA contest, while Brandon, the older brother, prepares with the help of his friend, Frank.

Tom Hardy, as Tommy, is a secluded, grumpy, tough young man, recently returned from the war, who becomes an internet sensation for his fighting skills on the ring, but most importantly, for his bravery on the field. He is messed up, permantly affected by the separation of his brother, but a fighter, and he uses that anger and will in all that he does, on and off the fight ring. He is a man of action, not words. His stubborness and the wall he build up during the war doesn't let him connect to the people around him, especially the other two men in his life, but in the end he manages to find that in a very touching, brutal way.

Joel Edgerton, as Brandon, the older brother, is a grown-up, kind man, a teacher with a beautiful wife and two daughters, trying to make a living, but failing with the bank rates; he rarely fights and only gets into the tournament just because of the money. He was the revelation of the movie for me and I think he delivered a great performance, I can't wait to see him in other movies, especially The Great Gatsby!

Observing the dysfunctional family, you end up rooting for Brandon, feeling sympathetic towards Paddy, as you wish for him to reunite with his sons, and you understand and admire Tommy. It's a messed up family, but with a good heart, one that needs a second chance. And we get our happy ending, after all, as usual!

All in all, the film delivers big time! I have to mention something that I always love and look after in movies- the Realness factor! If the story and the characters, the dialogue and sets and costumes seem real and believeable, if it is something that you can see and hear on the streets, than it's done its job, from my point of view. I connect more easily and I care more for these kind of movies, and Warrior is no exception! The direction is beautiful, the performances are just fantastic- especially Nick Nolte, who deserves a Supporting Actor nomination, and I love the soundtrack! It also had, what I call, the nail bitting factor, as I was bitting my nails so hard during the fights of the MMA tournament, hoping for a win! The action/fighting sequences are great, entertaining and well-executed!

Warrior is a great movie and it might have just creeped up in my top 10 of 2011! You should see it when you have the chance!
Posted by Diana at 9:48 AM