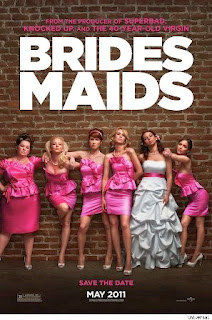 Christmas is not a good time to watch a war movie, or horror or anything too dramatic. You should see something light, funny, interesting. My choice for the 26th of December? Bridesmaids! How was it? I loved it!

The movie, a comedy, had all the right elements: funky, a little bit excentric protagonist, a best friend, weird roommates and, of course, a funny situation that moves along the plot. But still, it exceled in many ways.

First of all, say what you want, Kristen Wiig is funny. Kristen is funny in her own special way, in the SNL way that made her famous and the jokes and style of the famous tv show transcend to the big screen, as well (obvious example, Annie vs Helen speech at the engagement party). The script, co-written by her, has some very funny lines and scenes and doesn't go over the top very often (exception being the very end, with the Megan & Air Marshall video).

3 key moments that had laughing out loud: (1)the last part of the airplane scene ("there's a woman on a wing..."), (2)Annie, in the car with Helen, trying to get Rhodes attention and (3)Lillian, showing up in her designer dress in her apartment, to show Annie. Funny for me, at least.(p.s. I love SNL, as well, some sketches are hilarious, and they have so many talented people in the cast: Kristen, Bill Hader, Seth Meyers, Taran Killam and so on).

Second of all, the story was simple, endearing, and of course, had the classic outline of a comedy (perfect friends, big situation, friends break up, they hit bottom, they reunite, they are both happy bla bla). You know the drill- but Bridesmaids had a little bit more. I don't know what- maybe it was Kristen Wiig, maybe it was Mellissa McCarthy or Rose Byrne (both fantastic from my point of view), maybe it was the chemistry between the women, or the lovely surprise provided by Chris O'Dowd (cool Brit, did you see him present the BIFAs? hilarious), or the funny script- I can't really say exactly, but it worked for me.

Other mentionable elements that I observed during the viewing: ..and the winners for the weirdest roommates in history are Gil and Brynn; did I ever tell you how much I love cupcakes?; Jon Hamm can play a very convincing jackass- maybe he is one in real life?; Megan is right by saying "you're your problem Annie, and you're also your solution!"- we should all learn from that one and stop complaining.

In the end, it was a great, smart comedy! I liked it! You should see it when you have the chance!
Posted by Diana at 7:21 AM