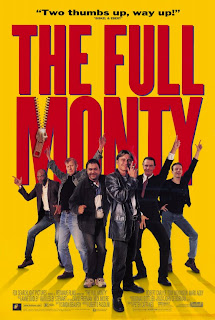 I recently re-watched Full Monty and I must say, I still liked it as much as I did the first time I saw it. The Full Monty is one of the most famous, most loved British films ever, because of its success in highlighting a social problem in a funny, entertaining way. It tells the story of a group of unemployed men who decide to put on a striptease show for the local women in order to raise some money, since their job hunting so far wasn't that successful.

As far as British movies go, I think this one is quite memorable. It's not perfect, but its beauty lies in the fact that it treats the British culture and challenges with a lot of humour, heart and realism, and here is where the film's magic sits. It has the accent, the dirty mouths, the crazy characters, and the actual story is both funny and heartwarming. Some scenes, in particular, are hilarious: the auditions, stealing Flashdance, the practices (the Arsenal analogy, and especially, the part where they get undressed in Gerald's house). My favorite moment has to be the dancing in line at the job center, I just love it for its simplicity and fun factor.

It features many fine British actors, like Robert Carlisle, playing Gaz, the main character, a broken man who is trying to keep his son from a messy custody settlement, or Mark Addy (King Baratheon) as Dave, the shy best friend who is reluctant to the whole situation. I also have to mention the famous Tom Wilkinson as the uptight Gerald, most likely to succeed out of the group, who gives a wonderful performance.

In the end, Full Monty is an easy going, funny British comedy that deserves a shot. It might surprise you.

P.S. Advice: put on the English subtitles, if you have the option- sometimes it's hard to understand :)

So you know I told I'd be back after the 1st of september, super active and committed to twitter and blog? Well, I am kind of breaking that promise now, but I have a really good excuse. By some miracle, I got accepted and now attending a special event organised by the distributors of UK showcasing some of the falls biggest films and it's been a crazy, but highly enjoyable and entertaining experience.

I am pretty paranoid about what I can or cannot say and I did sign some embargo papers, so I think I am just going to mention the movies I've seen so far and what I will see today and tomorrow- that should be ok, right? Reviews will be up shortly, especially for the ones coming out in the following weeks, but I will have to wait for others, because of the said embargo.

Please do come back tomorrow, I have a nice special post for you :)
Posted by Diana at 8:02 AM