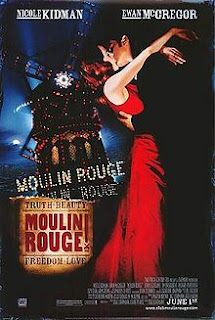 Directed by Baz Luhrmann and written by him and Craig Pearce, Moulin Rouge is a love story set in Paris 1899, between a young writer and a courtesan. A young English man (Ewan McGregor) travels to Paris to find inspiration and, most importantly, love, and gets mixed up with a group of artists who are looking to put on a show in Moulin Rouge, so they recruit the talented writer and end up convincing the owner and investor (the Duke) to do the improvised Indian play. All this time, the main actress (Nicole Kidman) falls in love with Christian, behind the Duke's back, and the complications threaten to put in danger not only the show, but also the lives of the people involved.

I've been wanting to see this movie for a long time, after I've heard so many great things about it, so I guess I can say I had high expectations for it. Did it rise to the challenge? Not entirely, but it is a very interesting and entertaining film, able to capture the love and attention of people of all ages.

The most appealing factors of this film are obviously the visual and musical aspects. Firstly, the music, a mixture of orchestra, old school pieces and contemporary songs (bold choice, putting a Nirvana song in a cabaret show), definitely raised some eyebrows and I was a little taken aback by it, but got used to it by the middle of it. I loved the use of Your Song and the one she played on the rooftop, after she met Christian, but some songs were weirdly showcased- Like a virgin comes in mind, that was a strange scene.

Secondly, the visuals. I have to say, Baz Luhrman always knows how to put on a good show- Moulin Rouge is no exception and everything looks amazing. I absolutely love the sets and the costumes, I thought Kidman's entire wardrobe was just breathtaking, and the art direction was very good. One thing that put me off was some of the very quick camera action in some scenes, like the audition one or the beginning of the film- I almost got dizzy and it didn't help the movie overall- I understand where he was going, but he overreacted with it just a little, in my opinion. I did like his direction, especially what he did with the Tango scene- that was beautiful. Although at parts crazy, the audition part in Satine's room with the whole cast was very well executed and entertaining to watch- from the poetry reading and its following hilarious scene where he wants to read his poetry and she thinks it's sex what he is after, to the singing and dancing and improvising the story for the Duke.

As for the casting, it was great for the script, although I would have liked more recognizable faces, especially for roles like The Duke or the artists group. Moving on, Nicole Kidman played Satine's sexy, sultry part to the T and I admired everything about her, from the performance, to the singing, to her fantastic dresses. Ewan McGregor was the equivalent of charm and grace and did his part perfectly- I saw the love in his eyes, I believed his tears at the end and I rooted for him and his quest for love throughout the film. I also have to mention John Leguizamo, who played Toulouse-Lautrec- he is a great actor who deserves more credit, and he was very sweet in his role.

In the end, Moulin Rouge is a love story, a tragic one, but one that gives hope. Not the best musical or romantic movie I have ever seen, but a very good one that mostly deserves its praise.
Posted by Diana at 8:20 AM