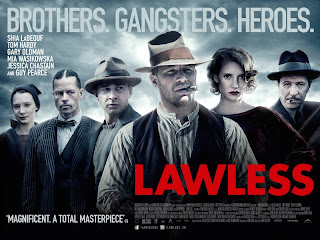 Lawless is a 2012 drama movie about the lives of three brothers (Jack, Howard and Forrest) who fight to survive and keep their business afloat in the prohibition era. John Hillcoat directed a Nick Cave script based on a book written by Matt Bondurant.

One of the most anticipated movies of this fall, Lawless features an ensemble cast with big names like Tom Hardy, Jessica Chastain, Shia LaBeouf, Gary Oldman and Guy Pearce, and promises a hell of a ride, not only by looking at the names involved, but also by checking out the synopsis and possible outcome. Many say it's a gangster movie; it is set in the prohibition era, when liquor was hard to find and distribute, and there are a lot guns and violence used. Actually, when it's violent, it's fucking violent- a lot of force and strength, hard hitting punches and blood-heavy moments. Some scenes are unsettling to watch and this kind of violence affects you more than the usual guns firing or horror movie killings. The story follows the Bondurant brothers of Franklin, Virginia, who were one of the very few people who didn't give in into the pressure of the petty thugs and protected their business with all costs during those hard times. Guy Pearce, as Charlie Rakes, is the classic monster, villain and all around bad guy, giving probably the standout performance of the film, while Gary Oldman, as Mafia man Floyd Banner, kicks ass and proves his ability from the start, giving a very believable gangster performance in under 1 minute; he has a surprising change in character development, but is underused. Maybe that's where the problem lies with this film - the little flaws of the script that are not visible immediately, but that ultimately affect the overall opinion of it: underdeveloped characters, unbelievable stories and lines, and so on.

Otherwise, Lawless is pretty wonderful to watch. It has beautiful cinematography, it's well directed and the soundtrack is appropriate to the action. The sets and costumes are very good and it has the right feel of the era. As for the casting, there was little to no fault to it, although I had my doubts with Shia LaBeouf, mainly because I just find him to be quite annoying. By the end, he proved me wrong, in most scenes, but then again, I don't think he had a challenging part to play. The two best performances definitely come from Guy Pearce and Tom Hardy. The first one, as the wild, control-freak, obsessed, dirty police force, proves to the world, yet again, his immense talent, and I am pretty sure we will definitely see him around the awards ceremonies this year for his Supporting Role. Tom Hardy is probably one of the best and the most underrated actors of our time and his performance in Lawless just enforces this opinion- he plays the grumpy, distant, no-emotions Forrest in an amazing way, demanding attention and respect for his courage, unwillingness to surrender and loyalty. Other big names are, unfortunately, underused, and that was a shame- Gary Oldman barely had 10 minutes on screen, and the two leading ladies, Chastain and Wasikowsa, could have had more developed and complex characters to base their performances on, but still, they did a good job.

In the end, you will leave the cinema thinking "That was a very good movie", but not being too impressed by it. I liked it and I suggest you should see, but don't go in with high expectations- somehow, somewhere, it doesn't quite deliver its promises all the way.
Posted by Diana at 7:39 AM