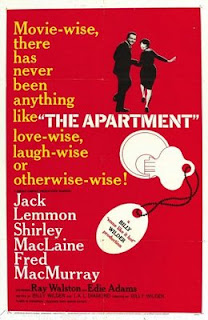 The Apartment is a 1960 romantic comedy written and directed by Billy Wilder. It tells the story of Baxter, a New York bachelor who often "rents" his apartment to his friends from the office, or better said, his bosses, out of courtesy, but also in hope of getting a promotion. His neighbors think he is a ladies man and is always partying, but they couldn't be farther from the truth, as Baxter is a sweet, rather naive, incapable of saying NO man.

Trouble and comedy arises when he finds out the woman he likes, Fran, the lady who runs the elevator at the office, is in a relationship with Sheldrake, the man responsible with promotions in the building, and, to make things worse, they are using his place to meet. After a quarrel between the two lovers in Baxter's apartment, she tries to kill herself, but the sweet young man comes in and saves the day, daring to do more and finally admit his feelings to her and to the older man.

As one would expect from a Billy Wilder script, it is funny, charming, full of misunderstandings, complications and hilarious situations. And although I haven't seen all of his movies, I still felt that it was too...Billy Wilder?!? His style is easy to recognise and this film frequently made me think "Hmm...I've seen/heard something like this before", plus the characters are very similar to the 50s comedies with Marilyn Monroe. Don't get me wrong, I liked it, but it certainly wasn't refreshing or extremely interesting to watch (that being said, I also felt the movie went on a little too much, but maybe it was just me).

The casting was spot on, and I just adored the two leads, Jack Lemmon and Shirley MacLaine. Lemmon portrays the sweet and naive man in a very charming, entertaining way, and Shirley MacLaine as Fran, the sweet, sexy, sultry, sassy, lovely woman operating the elevator, was the standout for me- maybe because I have never seen her before in an early days film, but I thought she was remarkable. One thing that was off for me was the resolving of the conflict between the two the end- it felt a little bit rushed, I felt like the transition and his change would have been done better and more fluidly, and the romantic aspect could have been more explored.

To conclude, I can say The apartment is a perfectly enjoyable and sweet Billy Wilder romantic comedy that you will like, but not particularly be impressed by. Still, it is worth a watch!