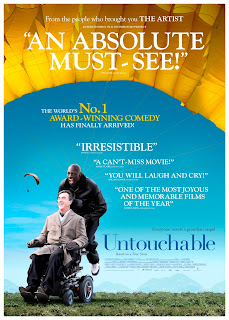 During my intense film viewing at the beginning of this month, I had the pleasure of seeing a wonderful French movie called Untouchable. It tells the real story of two men from different social classes reunited by a lovely friendship, which forms when Driss, a young man from the wrong side of the tracks, gets a job as a caretaker at the house of Philippe, a quadriplegic. Directed and written by Oliver Nakache and Eric Toledano, Untouchable is a lovely story that deserves your attention and love.

The strength and beauty of the film lies in the quality of the script, which manages to mix an emotional story of hardship and problems with the funny interaction of two totally different men. Featuring funny and silly lines from Driss and sarcastic, sometimes moving retorts from Philippe, the two carry on their shoulders the weight of the movie, and they do it wonderfully, as their chemistry is palpable and very enjoyable to watch.

Driss is a young man who grew up in a family of too many kids, who is now trying to get away and find a job. He ends up being hired as a caretaker for mister Philippe, who sees something in him, although he isn't the obvious choice. Or maybe the old man just wanted a change of scenery, a breath of fresh air and honesty around him and Driss provided that. Whilst the young guy is crazy, spontaneous and says exactly what's on his mind, with no reservations, Philippe, having been brought up in another environment, is pretentious, taciturn and hard to please. But the interesting thing is that they complete each other, as corny as it sounds- they offer to each other what they can't have or do for themselves and that leads to a great friendship. The old man teaches the young one about art and music, offering him a nice roof to live under, and Driss pushes the quadriplegic man to live life more, to dare to do more, in spite of his incapacity.

The performances are great and deserve credit. the super funny Omar Sy who maintained the easygoing and cool aspect of the script and worked perfectly with Francois Cluzet, a great French actor who shined through his supposed illness and delivered a heartfelt performance. Other worthy mentions are Anne Le Ny as Yvonne, one of the helpers in the house and Audrey Fleurot as Magalie, the young, beautiful assistant that Driss has a crush on.

I don't usually watch a lot of foreign, or more specifically, French movies, but Untouchable is worth every penny spent and minutes wasted seeing it. Its warmth, funny lines and wonderful performances make this film an unmissable one- you should see it, it will brighten up your day and make you laugh multiple times.
Posted by Diana at 4:27 PM