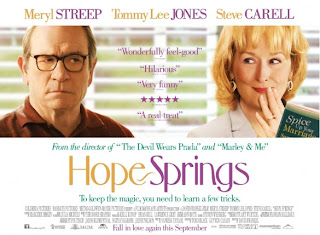 Hope Springs is an easy romantic comedy, directed by David Frankel and written by Vanessa Taylor. It follws the story of Kay and Arnold, played by Meryl Streep and Tommy Lee Jones, a married couple who, after 31 years, don't have any passion or interest left to keep them together. Kay decides to change things and books a 1 week intensive program with doctor Feld played by Steve Carrell, hoping that her husband will learn to love and touch her again.

Hope Springs has an interesting script, a little bit static, but if you like in-depth analysis of relationships or personalities, then this is the movie for you. Moreover, it's a character study of the in and outs of people and some of their sessions are actually really interesting to witness, since thy uncover not only feelings and past situations, but also character traits and reasons behind some of the actions.

Although it is heavy on analysis, it does also feature funny, very awkwards scenes, that sometimes make you cringe, because well, they are older, and you feel like your parents could be like that, too. The cinema or the hotel room are just two examples of those kinds of moments.

Performance wise, as you would expect from a cast like this, eveything runs smoothly. Meryl Streep is just fascinated to watch; she plays a woman that does and knows everything, in the perfect housewife way, but hasn't actually experienced life. In one of the sessions, when she's tearing up, there is a close-up on the expression on her face- she showed years of experience and talent through one look, and that's just something that very few actresses nowadays can do; I love her. Tommy Lee Jones is Arnold, her husband, a very grumpy, complaining man, who's oblivious to his marriage problems. His chemistry with Streep was very good and believable and they worked perfectly with Steve Carrell, the third major actor. He gave a surprising performance, as he played a very serious part- I was actually expecting him to crack a joke or do something stupid, but no, he maintained his part throughout the movie and it kind of worked.

Overall, Hope Springs is a good movie that will make your night more pleasant, but of which you will forget in a day or two. Still worth checking it out, but maybe on DVD.
Posted by Diana at 9:39 AM