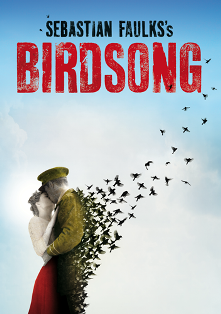 Birdsong, the novel by Sebastian Faulks, has been recently adapted into a miniseries by the BBC, with a screenplay written by Abi Morgan (Iron Lady, Shame) and directed by Philip Martin. As usual, we can expect great things from it, and it truly is a beautiful work of art, although it has certain flaws.

Episode 1
The story follows Wraysford, a young British man, through two different periods of his life: the first, set in 1910, is the short, but memorable time spent in the house of a French family, where he meets Isabel, and the second, set in 1916, is the world war. 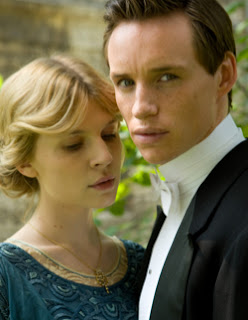 Eddie Redmayne, as Stephen Wraysford, is good, but he does annoy me with some of his manners and gestures; if you have seen My week with Marilyn, you know what I mean: his eyes. I'm not saying they are not beautiful, because they are, but his glance, the way he looks at someone or something, even if it's Isabel, the love of his life, or a random tree in the woods, it's always the same- his starring eyes are becoming a signature move/look. He is quite a character and I loved him in Pillars of the Earth, but he relies too much on his pretty eyes, which is not good- the British film industry is growing day by day, showcasing younger, attractive, talented men like Harry Lloyd, Douglas Booth, Jeremy Irvine or Richard Madden, and in a few years, those eyes of his won't be enough.

Speaking of attractive British men, we also have Matthew Goode and Richard Madden in the cast. While the Single Man star is briefly seen in some scenes of the episode, The Game of Thrones resident King plays Weir, the nice guy with knitted sweaters who is, probably, the only friend of Wraysford on the battlefield. Joseph Mawle also gives a heartwarming performance and it should be interesting to see how his character evolves in second part.

Clemence Poesy portrays the young French woman who falls in love with Wraysford, and unfortunately, the only thing I saw in her was beauty, that's all. Effortless elegance and grace, lovely features and great style, but nothing more. She acts her part, but brings nothing new; it's like she is keeping a distance between her and Isabel, and you, as a viewer, cannot feel the connection, which is too bad, considering the interesting part she was giving.

As for the actual filmmaking aspect of it, BBC has, yet again, outdone itself- the sets are fantastic, the costumes, lighting and cinematography-breathtaking, and the direction beautifully highlights the story and its characters; absolutely nothing bad that I could comment on.

The series is off to a good start and I am curious to see what episode 2 brings to the story and the characters.

p.s. Sometimes, I just hate accents, I cannot understand what they are saying- case in point, Madden's Scottish one.

Episode 2
The second episode continues in the same rhythm as the first one: transitions between the past (Isabel time) and present (war time), excessively using the slow-motion shooting style (one of the film's major flaws). Apart from a few resurrections (of Wraysford) and far too many violent, unnecessary deaths (SPOILER-Weir, Firebrace, soldiers), there's not a lot of action, and I think that is the series main problem: although the story has a fluent and visually attracting pace, in the end, it is not satisfaying for the viewers. Maybe it's the book, maybe it's the script (but I doubt that, Abi Morgan has done a wonderful job), but something doesn't click- in the end, we get too much visual and too little action- it can get a little bit boring. 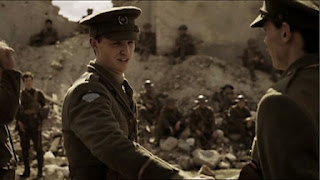 But the again, the cinematography is stunning and I love the difference between the two storylines: going from the light, bright tones of the Isabel time, to the dark, shady colors of the war time. The direction is good, but I do think they overused some techniques to create the dreamy, remembering state of the film.

Performance-wise, all actors have improved, Redmayne showing a little bit more the second time around. Madden is just as good and I loved the sensitivity of his character, although his ending was stupid. Joseph Mawle shines and Matthew Goode shows that he does have a leading man potential (he is a fantastic actor and a personal favorite).


Overall, Birdsong is a good, beautiful miniseries, but I am sure we can find better ones out there. I really hope you are interested in these type of TV shows, because I plan on seeing and reviewing more of them! :)

Do you usually watch miniseries? What other similar shows do you recommend?