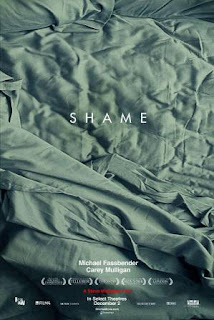 [SPOILER ALERT- I discuss most of the important scenes, but don't give out the ending]

Today I finally saw Shame- I have been anxiously waiting for it for over 6 months and now, that my wait is over, I can actually talk about it and say my opinion, I don't have to read about it anymore (so many articles and spoilers out there, I stopped reading after a while).

First of all, let me just say this is a very good movie- quality and beauty in every aspect of it: acting, music, directing, cinematography etc. Yet again, Steve McQueen takes this movie ten times over its potential and it's old news to me now the absolutely fantastic way he directs movies- Hunger was a perfect example and Shame is not only a great follow-up, but you can also see the improvement, the progress he has made. The scenes are much clearer, with more substance and visually more attractive (not that Hunger wasn't, it's just this one is better). I loved the fact that the talks between Brandon and Sissy are mostly shot from behind, the camera over their shoulders, it feels like an intrusion into their conversation, like you are watching a couple fighting in front of you in line. I like the sex scene at the end where he shoots the women and Brandon from completely unusual, different angles, or the way he shot the subway parts. On an end note to the technical, filmmaking aspect of it, I have to mention the use of music or lack of it- the soundtrack and sound editing were appropriate to every situation and gave it more power and sensibility in some cases (the beginning and end part, Brandon's song by Harry Escot, or the New York interpretation of Carey Mulligan's character). 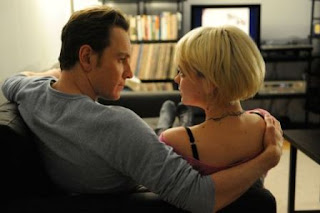 There is so much depth and tragedy in this story and movie that I could talk about. Where should I start? Let's talk about his sex addiction- the thing that struck me is that, not for one moment, did I see pleasure or happiness in his eyes or expression; it felt like a burden, like a automatic thing he is used to do every day, a thing that he can not control and that he needs to do, like eating or drinking. I think one of the main problems of Sissy's appearance is the fact that he can't continue his usual, secret, yet very addictive way of life; that, plus his past relationship with his sister, cause him to derail, to go in such state of misery and desperation, that he gives into all of his fears, in one night of destructiveness that nearly kills him, physically and mentally.

It all started with a failed attempt of having sex with a woman at work he liked; the same one who, 30 minutes before, tried to have normal dinner and conversation with; but he couldn't, because he can't relate to someone, he can't get attached to a human being. Most would say it is because of his addiction, I say it all goes back to his childhood and his family problems. Funny how, after she leaves, the hooker can immediately take him to the edge. He can't get off a possible sentimental fling, but a complete stranger can- after all, he just craves for the act itself, not the person who is with him.

After that failed attempt, he decides to go out and that's when all of his world goes down and we witness one of the most dramatic and disturbing meltdowns in film- some where shocked by the way he blatantly touched a woman in public, others by the gay action in a underground club, but I was surprised by the three-way in the apartment. At first, I was a little disturbed not by the actual scene, but the length of it, I thought it was too much, but it all made sense when he saw Brandon's expression- that pure state of despair, of craziness and loss of control over his body and urges. It looks like it almost hurts, like it could kill him. That was, indeed, shocking and it wrapped up his whole character, finally showing us what he is going through.

The last minutes of the film, of the night, the passing back and forth between his apartment, the club, the subway ride, it was masterfully shot and edited, one of the best scenes I have seen. Kudos not only for McQueen and the cinematographer, but also for Michael.

Because, honestly, you can't say that Fassbender was anything short than fantastic, it was like nothing I have ever seen. At the beginning I was a little skeptical, but that was because of the ordinary, quite boring actions he was put through (the script allowed it), but the second part of the film is truly a work of art. I believe, understand and sympathize with everything he does, I worry for him, I feel his desperation, or his anxiety when he runs for Sissy, and I am 100% with him on the rainy day, near the water. Fassbender deserves a Golden Globe, a Bafta, an Oscar and more. Will he get it? Probably not, the Clooney and Pitts of Hollywood have more charisma and apparent value on the market, but he should be recognized, at least at one of them (probably Baftas).

Another surprise for me was Carey Mulligan- the part of Sissy is very different from what we normally see of her, but she nailed it and gave it so much substance and power. The lovely scene where she sings New York was revealing, at least from my perspective- I felt like her life, personality and story just translated through her eyes and that song, it has hauntingly beautiful. Brandon's relationship with Sissy is hard to define, you can't really tell if he actually loves her, or cares about her, or is afraid. There was definitely something going on between them, but the closest thing to really discovering the truth was the discussion they had on the couch, near the end, and that didn't reveal too much, either. There is tension, there are repressed feelings, and probably love, as well, but Brandon is uncapable of showing his real emotions. It's like he is almost imune to all that is happening in his environment, to his world. 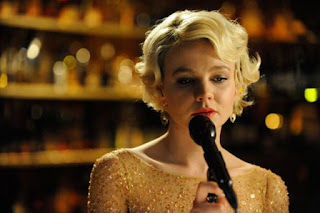 There are so many other things worth mentioning that I probably forgot, little details that made this movie better in so many way- script-wise, performance-wise or something else entirely. I can't disect all of it, but I am sure you will find other blogs who have noticed different aspects of it. After you read this review, go check out the others.

In the end, Shame is the kind of movie you don't like or appreciate immediately after the credits start rolling. I didn't. But then, you start thinking about it, remember certain scenes and then it hits you- that movie was great.... Fassbender was perfect...the subject was interesting and dramatic....the situations were extreme and sometimes pornographic.....but then again it's about sex addiction.....which is almost like a disease, a terrible situation to be in.....wow, that was powerful! I know I wasn't the only one, my friends got out of the theater rather disappointed, but afterwards, we started talking about it and we all realized it is a great movie!

Shame is worth your 10 pounds or 10 dollars or whatever currency you have! Believe the hype! Go see it!
Posted by Diana at 10:03 AM