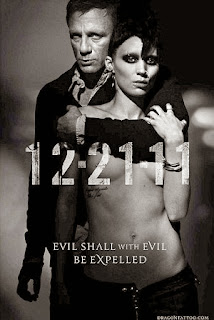 Usually, I am a big fan of David Fincher's work- I haven't seen everything, but most of it (or what I managed to watch) is really good: it's obscure, the shots are great, it always has a dark, twisted plot, a great soundtrack and the performances are fantastic. This movie fits into those lines.....and that's about it. For me, this experience was underwhelming and I must admit, I was a little dissapointed.

Now, I admit, it's not entirely Fincher's fault. The script, albeit good, with twists and turns, an almost replica of the book (but with the necessary cuts), still feels too much. As a reader of the book, knowing what to expect, I was patient enough to sit through it, but I must imagine that for the first-timers, the first hour was a little boring and afterwards, the unveiling of the actual truth and mistery, during the second hour, was stretched out too much. After Mikael finds out the names and numbers are biblical and asks for Lisbeth's help, things get interesting, but not quite; I was still expecting for a faster pace, a change in dynamics, but all I got was louder, more somber music and the usual scene A, cut to scene B reel- the only good parts where the one where the story of Mikael interwines with the one of Lisbeth, seeing what they were doing in the same time. Maybe it's not the scriptwriter's fault, maybe I should just criticise the book, who knows, but that aspect really bothered me.

As I said, in theory, you could still see and have Fincher's trademark characteristic. The soundtrack was very good, intense and perfect for the movie, the special effects were great and I loved the opening sequence- different from the movie, but still special and very interesting. The cinematography and the directing style were appropriate for this kind of movie and it did gave it an extra edge, but I still wasn't impressed.

One thing that I have to admit whole-heartly- Rooney Mara owned that part. From the simple, almost boring girl in the Social Network, to Lisbeth Salander, that was a huge transformation and I am sure that road was a journey she will not forget. Knowing that David likes to do at least 20 takes of every scene, the rape part must have been horrible- her performance during that moment was hard to watch and listen. As I said, she completely transformed herself in Lisbeth and seeing her latest appeareances, I guess she hasn't managed to shake her off.

Daniel Craig also delivers a very good performance, cold, but entertaining and unique. Christopher Plummer and Stellan Stargard, as grandfather and nephew, are superb, especially Stellan, who gives Martin just the right attitude, not too maniac, but with the right amount of craziness and intelligence.

Overall, although I admit, it is a good movie, I just didn't feel it, I was never in awe, it didn't made me flinch, I wasn't eagerly waiting for the next shot, I wasn't surprised, and no, I don't think it has to do with the fact I read the book, it was just not perfect. I left the theatre saying "yeah, it was ok, but nothing special" and the people around me agreed. My sister says it was too creepy and sadistical for her taste (she is more of a Breaking Dawn girl) and my mother, who has read the book, said it was good, but also too dark and violent, but she liked it overall.