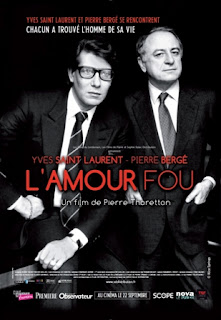 L'Amour Fou is a 2010 documentary about the life and work of famous fashion designer Yves Saint Laurent. Depicted with the help of Pierre Berge, his love partner, we learn more about the man, this character and his love for fashion and art.

The film, made by Pierre Thoretton, takes us from the beginning of his career at Christian Dior to his retirement in 2002 (his speech during the announcement is actually the first scene of the documentary and a beautiful one, that sheds light on his beliefs and passion on fashion), lingering much more on his private life then on his business.

In short episodes, the documentary mentions some of YSL most memorable moments of his career: his first collections at Christian Dior, where each one had more then 150 dresses, the Mondrian-inspired dress, the Opera and Russian Collections in the 1970s, his invention of pret-a-porter (ready-to-wear or street clothes), and random images and clips of his fashion shows, all sporting the elegant, classic sign YSL at the beginning of the runway.

One of the major topics discussed is his art collection. Yves Saint Laurent was a true lover and admirer of art, in any form, and together with Pierre Berge, he collected fantastic pieces: paintings from Andy Wharhol, Goya, Mondrian, sculptures by Constantin Brancusi and much more. Each with a beautiful memory attached to it, his partner tells the story of some of the most important ones, everytime shedding more light to the sensible, timid, poetic Yves. After the designer's death, Pierre decides to give their incredible collection to auction and the end captures the grand event that took place in Paris, at the Grand Palais, organized by Christie's. Just to give an example of the earnings and of the valueable items sold, the Brancusi sculpture was sold for 26 milion euros.

But the main aspect that this film ilustrates is the love between Yves Saint Laurent and Pierre Berge. They met in 1958, a couple months after Christian Dior's death (a mutual friend) and they remained together for the rest of their lives (with a brief separation in the 1980s due to the designer's addiction of alchool and drugs). Whilst Yves was the artistic man, the poetic, sensible man in the relationship, Pierre was always his rock, being the pragmatic individual that he needed to survive and make his business florish. They worked together perfectly, complementing each other in business and in love.

From the film-making aspect, it is beautifully made, having photos and footage of past collections interwined with interviews with Pierre and other close friends. The soundtrack, containing mostly melancholic piano parts, has some surprising songs, but stays in tune. The editing, or montage, could have been better, but still managed to capture the true essence of the era.

L'amour Fou is a soft, lovely homage to the great designer that Yves Saint Laurent was. If you like fashion, you should give it a try!

"fashion's role was not simply to make women more beautiful, but also to reassure them, give them confidence and allow them to assert themselves." Yves Saint Laurent