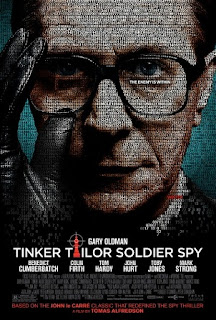 Tinker Tailor Soldier Spy (from now on called TTSS) is a classic British spy thriller set in the 1970s. It has all the right elements: bleak atmosphere, silent, monotonous characters, grey colours, cigarettes and secrets. A lot of secrets, well-hidden and carefully guarded.

George Smiley, played by Gary Oldman, is forced back from his retirement, to find out who the mole in the Circus is. Alongside Peter (Benedict Cumberbatch) and Mendel (Roger Lloyd-Pack, who I immediately recognized from Harry Potter), they start the search inside the "company", rulling out one by one.

Now, as I said, it can be a rather dull movie for some- for me, it was the first part, but right around the middle, or even before that, when Tom Hardy comes back into the picture and talks about his long lost Russian love and Cumberbatch steals information, I am sucked into the story and guess what? I am starting to enjoy myself- the plot thickens, the characters get more shadier, the secrets start pouring over, the music ascends....and in the end, we get our mole, all wrapped up with a bow. I have to admit it wasn't perfect and there are some loose ends, but overall, for a spy thriller, it was pretty damn good- well executed, great performances, fantastic sets and costumes and an interesting premise.

Acting-wise, you can never go wrong with Brits- they always seem to be on point. Colin Firth offers a swift change and a shocking turn in actions, Tom Hardy is convincing as a spy who falls in love with a Russian diplomate and tries to save her (I am starting to like him, I didn't before) and Toby Jones got my attention, he always surprises me. As for Benedict Cumberbatch- what can I say? This is was the first time I have ever seen him in a movie, and I actually loved him- although he has such a weird appeareance, not very attractive to say so, he is still very charming and has an appeal some work on for years; it's effortless, just like his performance.

Last, but not least, Gary Oldman- the man, the legend. I usually consider the wild, unpredictable, maniac performances to be the best, as they are rare to find in the real world, but mister Oldman proved me wrong tonight. He showed not only me, but everyone, that control is sometimes ten times harder to perform then a wild act. He played Smiley with such restraint and calm, that I do believe he deserves a lot more attention for this part that he is given now.

Overall, I think TTSS is a good movie and you should see it, if you have the chance! Brits rarely mess up and they didn't this time, either! Enjoy!
Posted by Diana at 9:24 AM