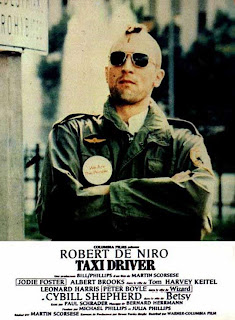 Up until last week, I hadn't seen Taxi Driver- I know, I know- "blasphemy", "you call yourself a film blogger", "I can't believe it" etc etc. I had it planned to watch it for a long time, so suddenly, one night, I said "Why Not?" and I put it on. I had rather high expectations, but I am happy to say even those were overcome.

Taxi Driver is a 1976 classic written by Paul Schrader and directed by Martin Scorsese, which tells the story of a Vietnam war veteran, who struggles with insomnia and dangerous thoughts and drives a taxi to keep himself busy. Clearly mentally unstable, he goes from one obsession to another, trying to right a wrong or revenge a nonexistent problem.

As I said before, I was blown away by the movie. The first and most important thing I loved and I will remember about Taxi Driver is Martin Scorsese's direction- the man is one of the best directors out there; I could easily describe at least 5 amazing scenes to showcase his genius: the opening scene, the random close-ups of the car and the city, the fantastic discussion in the cafe house and the change of camera shots between Travis and the afro-americans, and my favorite/s, the shooting scene at the end (the aerial view of the room after the cops arrived, the exchange of gun fire, that iconic close-up of the bloody Travis after it- everything was masterfully directed).

The small, but exemplary cast that they assembled is great and they work together very well, each bringing their own flavor and style to the table. The young Jodie Foster, as Iris, shines in a scandalous role, showcasing her talent as a young hooker who is used to the street life. Cybill Sheperd, playing Betsy, the campaign worker Travis falls for, offers the right amount of mystery and sensuality and works well with de Niro (I especially liked their first meeting at the cafe). Of course, I have to mention the funny looking Albert Brooks, who I didn't recognized at first.

The main character, the Taxi Driver, is played by the fantastic Robert de Niro. It truly is a defining moment in his career and one of his best roles ever. He perfectly portrays the part of the deranged men who is looking for a purpose in life after his retirement from the Marines. The deterioration of his mental state begins with the sudden obsession he develops for Palantine after his previous fixation with Betsy (Cybill Sheperd) ends up unsuccessfully. After his fail attempt towards the politician's ife, Travis redirects his vigilante spirit to the pimp controlling Iris and decides to end things dramatically. 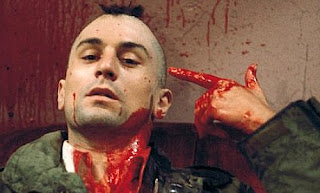 The last scenes are violent and bloody. That and actually the whole movie, well, at least in some parts, were very reminiscent of Drive- well actually, Drive was reminiscent of Taxi Driver. From the way it was shot, to some of the music, to the The Driver/The Taxi Driver...it's not an obvious resemblance, but it just gave me the feeling I've have seen it before somehow.

If you get angry every award season that some of your favorites don't make the cut, let me just tell you the situation for Taxi Driver: it didn't win any Oscars, it only got 4 nominations and they didn't even consider Scorsese for best Director, which is unbelievable.

All in all, as much as I try to analyse it, I feel I can't really do it justice, so I am just going to say this. It is one of the best movies I have ever seen. The story is very interesting, it features character development, something which I look for and love in a movie, the direction, production and music score are all amazing and blend it beautifully, creating a chilling, slightly mad atmosphere. I especially loved the first half of the movie, I was constantly being surprised by everything happening. The cast does its job to the T and Robert de Niro nails the Taxi Driver part, but the real star is Martin Scorsese's direction. Please see this film, if you haven't already!
Posted by Diana at 8:30 AM