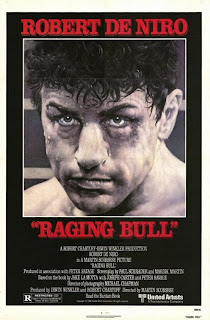 After seeing Taxi Driver, I couldn't resist the temptation of yet another Scorsese-de Niro collaboration and of course, Raging Bull was next in line. Directed by Martin Scorsese, and written for screen by Paul Schrader and Mardik Martin, the story follows the self-destructive life of Jake La Motta. I must say that overall, I wasn't that impressed with it and I won't see it again, but there are wonderful things to be said about it.

The opening sequence, in true Scorsese style and proving, yet again, his genius nature, is a fantastic mixture of orchestral music and slow motion shots of the boxer. Actually, the whole movie was perfectly directed- if on Taxi Driver, Marty used a lot of close-ups, this time around he went for the slow motion and it worked perfectly. I especially loved the scene in which Jake watches Vickie at the first dance, but also the seduction part- he sure knows how to show sexuality and sensuality and the women he chooses are just right for it. Another favorite is the final round of his last game with Sugar Ray- the shots of the two in slow motion and the lighting/framing/music/etc was beautiful.

From a film-making point of view, as usual, almost everything was great. The music score, the cinematography, the costumes, the use of Black&White and more. The thing that bugged me, although it wasn't very important, was the continuity problem in some of the scenes- there were some errors, some radical changes of De Niro's face and blood spatter in certain scenes, plus the fights were obviously choreographed and in some points you could see they weren't actually touching. Maybe it was just me, but it bother me in some points. As for the pace of the movie, I felt it was rather robotic and went from one scene to another another in a very straight forward way- it didn't create a pleasant or appealing transition between scenes, which is weird, since it did win an Oscar. [again, maybe it is just me]

Acting wise, you really can't go wrong with Joe Pesci and Robert de Niro. The first one was quite a revelation, as he portrayed the younger, more caring and protective brother of Jake La Motta, and earned mine and, probably most of the viewers, sympathy and admiration. De Niro's character, on the other hand, was insufferable. If I were to compare him to Travis Bickle, the taxi driver would win hands down in every category. Whilst Travis was wild, dangerous, intense, even deranged, Jake was just a hard headed, insecure asshole (pardon the expression). Maybe that's why I much prefer his 1976 performance to this one, although I agree with Robert's Oscar win for Raging Bull just for the "Why" scene in prison, which has to be one of the most painful moments I have ever seen. I also have to mention the transformation after the last Sugar Ray Robinson match- I almost didn't recognize him.

Raging Bull deserves his title of classic, but it isn't as good as Taxi Driver. I, for one, am not interested in seeing it again anytime soon and I will probably forget most of it in a month!
Posted by Diana at 2:07 PM