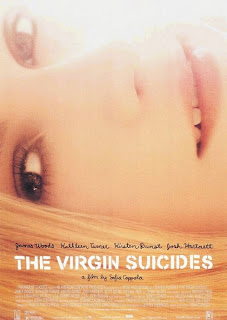 The Virgin Suicides is a 1999 film, written and directed by Sofia Coppola, which tells the story of the Lisbon sisters who are sheltered and isolated from the world by their strict, religious parents (James Woods and Kathleen Turner).

I must say that I have never been a fan of Sofia- yes, her movies are visually beautiful and she always casts great actors, but often I am bored by her movies; some are too dreamy, some overly pretentious, some try to showcase real emotion, but leave me indifferent. "The Virgin Suicides", her first directorial effort, was the complete opposite and I was pleasantly surprised. She did a fantastic job of adapting an overlooked literature classic and turning it into a mesmerizing, moving film that in the end left me with goosebumps.

As I said before, the script follows a group of men recalling the tragic events from over 25 years ago that rocked the Lisbon house, a family that lived close to their home and with whom their were obsessed with. Among the 5 sisters, Cecilia, the youngest, was the first to go- her dreamy personality and her inability to interact with people her own age made her take her life. Her 4 remaining sisters (Lux, Bonnie, Mary and Therese), try to hold on and make new friends, all whilst their extremely restrictive parents still control every moment of their existence. This ultimately leads to a drastic punishment, as Lux comes home the morning after the prom- Mr and Mrs Lisbon are so frighten of might have happened, that they isolate the girls in their room, leading them, ultimately, to take the hardest, most dramatic ending.

For a first effort, both in writing and directing, The Virgin Suicides was remarkable. The script was interesting, showcasing the sisters, but making us understand what they were like from the others points of view, therefore still keeping a touch of mystery over their situation. Visually, it was beautiful- the way it was shot, the cinematography, the editing, the random dreamy sequences, all fit together wonderfully. The score and the soundtrack are also standouts that help the movie move forward and create tension.

That last scene, when Lux looks over her shoulder to the young men waiting outside her door and the chilling discovery of the girls and retelling of facts about that last night was incredibly moving and it gave me goosebumps.

Casting wise, as always, Coppola gets it right (I am sure it doesn't hurt that her father is named Francis Ford, either, especially for a first feature film). Kirsten Dunst is amazing as Lux, portraying a not so perfect, but oh so sensual and crazy-mysterious girl who seems to be the most outspoken and relaxed of all the girls. Josh Hartnett, as the young man who falls in love with her, creates good chemistry with Dunst, having a very palpable, sensual, yet naive interaction with her. The other 4 girls, all blonde and with similar build, are easy to distinguish physically, but hard to understand on a personal level, as they don't get the same amount of attention from the script or the director. A little mention goes to AJ Cook, playing Mary, as I know her from Criminal Minds, a great TV show that I sometimes watch.

The Virgin Suicides is a fantastic movie, that will definitely go into my list of shocking, moving, chilling features, right up there with Hard Candy or We need to talk about Kevin. It was particularly sad and unnerving to see those girls take such a difficult way out of the situation they were in and I saw myself wondering, for a while after it finished, why did they do that? The first logical answer, for me at least, was the fault of the parents- their strict, isolated way of protecting the young women made them feel "choked" and in need of escaping, but I think it's more than that. I would like to think there is more than that because if there wasn't, than the idea of having kids is even more scary now. To think that Mrs Lisbon has to carry on her shoulder the deaths of all her 5 children is something I don't wish for anyone.
Posted by Diana at 11:36 AM