Musical Saturday: An American in Paris[1951] 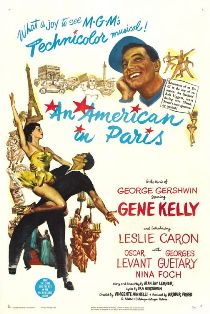 I saw An American in Paris at the British Film Institute on a cold end-of-October day and it brighten up my day! It was such a pleasure seeing it, after endless dramas at the London Film Festival before (which I enjoyed also, but in a different way).

The movie tells the story of Jerry Mulligan, a struggling American painter in Paris and his relationship with two wonderful women: Lisa(played by Leslie Caron) and Lilo(played by Nina Foch).

There were many beautiful aspects that I loved about this movie. The first scene, introducing the characters, which is rather atipical and simple; the description of Lisa by Henri, featuring the amazing Leslie Caron dancing in all of her splendor- she is very graceful; all of the costumes and the sets; the piano scene of Oscar Levant, showing us his talent in a dream sequence and many others.

Gene Kelly is probably one of the most charming men I have ever seen on screen. That, plus his dancing skills and the way he makes it seem so easy and enjoyable, you've got yourself an A start actor. He has believeable chemistry with both Leslie and Nina and smoothly switches from actor to dancer in each scene. The musical numbers were sweet, but not very memorable (like the ones in West Side Story, for example), and the final dancing scene stretches a bit too long, but all is forgiven just for that shot of him and Leslie on the yellow, glowing background and the intro/outro editing. Beautiful!

I found myself smiling my way through the movie and it was, like I said, very enjoyable! It's a classic and you should see it!
Posted by Diana at 11:08 AM