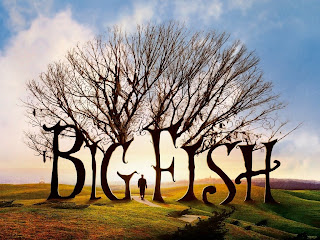 Big Fish is a magical story about life, directed by Tim Burton from a novel by Daniel Wallace and a script by John August. It follows a man (Billy Crudup) who comes back home to reconcile with his dying father, meanwhile trying to find out the true adventures of the man, as he always loved to tell stories and make up things.

The film shows us Edward Bloom's life, from early stages (Ewan McGregor), to late ones (Albert Finney), taking us through a magnificent journey that almost always puts a smile on your face. I loved the fact that every anecdote, every step the man took had a meaning, a morale to learn from it: the more difficult it gets, the more rewarding it will be (the forest), never settle or go with the easiest choice, keep trying and developing (when he decides to leave Spectre), work hard and never give up (the circus) or that fate can be sometimes cruel to you, even if you don't deserve it (Don Price and Sandra). It all felt like a fairy tale, where Ed Bloom was the hero trying to reach its goal, and on the way, he made friends (great cameos by Steve Buscemi and Danny de Vito), experienced crazy things and encountered the love of his life. Yes, maybe most of the stories weren't actually true, but that didn't keep him from living his life at the fullest and taking pride in what he has done.

I also liked, and somehow expected, the transformation of Will, his son. Raised up by the these adventures, he hardly connects or believes them, so now that he is growing older and he is getting ready to have a child, he is in desperate need of the truth. He starts off so cynical and logical and without any passion left, but ends tangled up in his father's memories and anecdotes, slowly taking on his spirit. One of the last scenes, where Will tries to imagine the way Ed dies, is lovely, bittersweet and heartbreaking- I started sobbing like a crazy person when they reached the river. Plus, the funeral, with all of his dear friends gathering to laugh and tell stories about him, Edward, the man with the wildest imagination, was moving. It was such a lovely ending to a wonderful story.

From a filmmaker's point of view, everything seemed perfect. The cinematography was stunning, the direction, perfect for the story and what it wanted to transmit, and the score helped it move forward and create a magical atmosphere (surprisingly enough, Big Fish was nominated for an Oscar just for best score- Danny Elfman).

The casting was fantastic and I loved and cared for each individual. Billy Crudup filled up the shoes of a rather simple character, Will, that could have be done by a dozen other actors, but he made it a little bit more special. Albert Finney gave a very good performance and I didn't understand how come he wasn't nominated for an Oscar for best supporting actor. The star of the movie is, of course, Ewan McGregor. The man gave so much passion, charm, naivety and love to his character, and his interaction with the rest of the cast and his infectious smile, moved everyone and made the film the classic it is.  I also have to mention two amazing women that I love: one is Jessica Lange, who is the embodiment of class, beauty and has a very calming presence, and the other is Helena Boham Carter, who, as Jennifer Till, manages to steal the show in just a few scenes (young HBC was very sweet and adorable, sometimes I wish she had stayed that way and didn't transform into the wacky character she is today).

Bottom line, you need to see Big Fish! Maybe you won't find it as magical as I did, but I think it has a little bit of everything and it will impress you, one way or another. It's the kind of movie I would show my children  because it's full of anecdotes, funny scenes and has a lot of learning points that they should get. It's definitely one of my favorite movies I have seen in a while!

I leave you with two wonderful quotes from the movie:
"We were like strangers who knew each other very well"
"A man tells the story so many times, that he becomes the story"
Posted by Diana at 9:59 AM