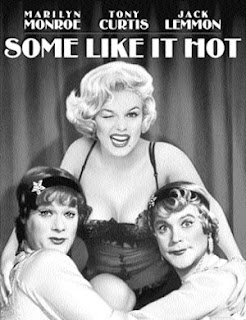 After viewing my first Chaplin movie a few days ago, I decided to have another introduction into the filmography of a famous actor, and this time, I chose Marilyn Monroe, with Some Like It Hot, also starring Jack Lemmon and Tony Curtis.

It's an entertaining story about two musicians caught in the middle of a mob hit, who decide to run for their lives and join an all female band disguised as women. More complications set in as Sugar Kane (Monroe), the lead singer, a sweet, naive, gorgeous woman, comes into their lives and makes their hidden identity that much harder to maintain.


Written and directed by Billy Wilder, "Some like it hot" is a very funny, interesting and appealing movie that has the deserved title of a classic: from the surprisingly good direction and action scenes, to the costumes (which won an Oscar), the well-paced script, up until the amazing performances of all three main actors, everything is perfectly timed and executed. The black and white was appropriate for that era and helped give the film an even bigger touch of glamour, if possible, and the score maintained the rhythm and feel of the story.


The performances were wonderful. Although Jack Lemmon, as Jerry/Daphne, got the most love during awards season, I leaned more towards Tony Curtis, playing Joe/Josephine (quite a revelation for me in this movie), and the wonderful Marilyn Monroe. Both men had palpable chemistry and added more layers of humor and humanity to their characters, especially Curtis, and worked great together with the famous starlet.


As for Marilyn Monroe herself, I have to say I now completely understand the fascination with this woman. Interestingly enough, she was not perfect physically: her face had no particular features, her breast were big, and sometimes with an unflattering shape, and she wasn't, by no means, skinny: actually, she was quite plum in all places. But still, I haven't seen an actress yet with her charm and level of appeal: she is like a magnet for the eyes- it's like the screen lights up when she is on it, it loves her.  Her sweet, naive, rather dumb personality, paired with an attractive siluette and undeniable sensuality and appeal made her stand out in every frame, scene, situation or picture. She is a beautifull woman, despite her rather insignificant flaws (she looks stunning in the scene of the night on the train, when she goes to talk to Daphne).


I should know or be used to the fact that pre 90s movies can be funny and entertaining, but I still like the surprise of acknowledging it after every viewing of an old movie. This one was no exception; speaking of which, I think this world perfectly describes classic movies for me, and it is harder and harder to find this quality these days: "entertaining". They make you relax, enjoy the film, not over think or feel extreme emotions- they are just there to offer the possibility of dreaming, of going into an alternative universe where things are fun, dynamic, interesting and worth trying. It has some memorable scenes: the train station, "I wanna be loved by you" performance, the escape from the hotel, the revelation of Joe/Josephine at the end and my favorite, the "seducing" scene on the yacht (his smart plan, her naiveness, the kissing- it was a great one to showcase Marilyn's talent and appeal).


In conclusion, "Some like it hot" is a light comedy that should be viewed for many reasons: Monroe, two great male performances (Lemmon and Curtis), good script, funny scenes and lines and so on. Try it!


P.S. Favorite quotes:
- "Look how she moves...she's like jello on springs"


- "Have you ever tried American Girls?"

Email ThisBlogThis!Share to TwitterShare to FacebookShare to Pinterest
Labels: 1959, Billy Wilder, comedy, I wanna be loved by you, Jack Lemmon, Marilyn Monroe, Nobody's perfect, pick of the day, poster, quote, review, Some Like it hot, Tony Curtis