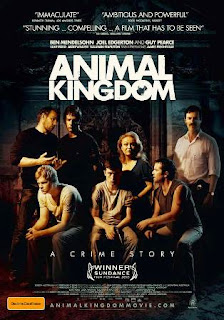 The first movie I saw in 2012 was Animal Kingdom. It wasn't an obvious choice, but I am glad I saw it, because it is a good film, a well-thought, shocking in some parts, tough film. It tells the story of Josh, a teenager who has to survive through the troubled times his newly acquired family puts him through.

In the first scene, J (James Frecheville) idly watches Deal or No Deal as his mother is laying unconscious on the couch next to him, and even when the paramedics arrive and he coldly replies to them that she took heroine, you know it's not your typical movie. Josh's numbness creates and drives the film forward; the lack of emotion in most of the situations he is faced with, transcends to the movie, as well, giving it a similar vibe.

After his mother's death, he moves in with his grandmother and uncles: Baz (Joel Edgerton) is the one everyone respects and likes, because he cares about them and wants to make things better and easier; Craig(Sullivan Stapleton) is erratic and sells drugs,whilst Darren(Luke Ford), the youngest one, is a quiet figure. They all survive by breaking the law, but they stick together and help eachother. As, for example, Baz tries to do, one day, in a supermarket, when he gives money to his brother Pole, the oldest one, who is currently hiding from the cops. Baz is smart and wants a better future for his family, he even suggests switching to more legal actions, like the stock market. But just when you thought you have found your good guy, BAM, he gest shot and there goes Edgerton and all of the love from this movie. This sets off a chase between the cops and the brothers (they kill two officers out of revenge), as Craig is the next one to be put down by the authorities.

But this story follows Josh, a young man who is trying to survive in a strange world, with a violent, out of control family, who forcefully involves him in their business. The grandmother tries to keep the clan together, but there is not much she can do; Darren is useless, Pole is acting strange and Josh is way out of his element, just trying not to piss off anyone. It doesn't help the fact that a detective(Guy Pearce) is pursuing J, asking for informations in exchange for protection.

The second part of the movie picks up the pace, as Pole's behaviour and actions move the film into a different direction, one that is overwhelming for Josh who swithches from one side to another. The end is a bit confussing, surprising and shocking at first, but then you could understand the reason behind it. I keep asking myself: whose side was Josh really on?why did he changed his mind so suddenly and radically to go from ratting out his uncles to conspiring with his grandmother to kill Pope? Was it his girlfriend? But it's the family's fault that she was dead and that he was in such a deep shit! Maybe it was the faked attack on the house that triggered his change! I don't know, but I like the fact that it made me wonder!

I thought Josh's numbness and lack of emotion will slow down the movie for me, make it boring, but it didn't.  Yes, you are shocked to see a scene like the one where the special agent points a gun at his head and he doesn't react in absolutely no way- it says everything. He went through so much shit as a kid growing with a heroine-addict mother, and more so now, with his family of criminals, that a gun does not even cause a reaction. He is not scared of anything, because he can't find a reason to live properly, to enjoy life. Getting out of that car or getting shot a second after is the same thing to him. He is numb.

But then again, we do see he is alive, that there is something kicking inside him, in some scenes, especially in the one where he cries in the bathroom of his now-dead ex girlfriend; is that girl the only thing able to make him flinch? or was he just fed up with everything? James Frecheville's performance is fabulous and shows so much depth, as he peeled off layers and layers of his characters throught the movie. He suffers the most and has the most remarcable change in character at the end.

Another interesting characters is uncle Pole; since the very first moment, you know something is not right, he is not right. His mood swings, his behavious, his stare, the way he tries to connect with his brothers, everything scream WRONG; you could see it in everything, in his eyes, in his manners, it was just a vibe. He is instable and inpredictable and you know something will happen...and it does. I thought Ben Mendelsohn was fantastic and played the part so well, that I was creeped out from the beginning.

Janine Cody, the grandmother, the Smurf, the matriach of the family, is always on top of the situation, affectionate and supportive all of the time, but shows her true colors in the car scene, showing us a cruel side, but a very smart one. She is the boss and she will have her way, one way or the other. Jacki Weaver is outstanding, her performance is smooth, natural, caring, yet very controled and knowledgeable; the Oscar nomination was rightfully deserved.

The script was very good, with twists and turns and appropriate pace, with distinct, interesting characters who develop throughout the movie in some way or another, great dialogue, and the direction was in point- kudos to David Michod, who achieved both.

Overall, I think it's a very good movie that you should see if you have the chance. It's a more subtle, raw, indirect film about crime, one that creeps up to you and surprises you in many ways.
Posted by Diana at 7:32 AM