...and the Golden Globe goes to:

As I did in the last few years, I stayed up and watched the Golden Globes. Although I said I wouldn't tweet about it, I broke my rule for about 6-10 times, but below is my...how to say it?.."full coverage"? "semi-live blogging"?

My comments and notes from this year's Golden Globes:


Red carpet
- Charlize Theron is absolutely stunning and her dress is beautiful!
- Was it just me or did Angelina look nervous whilst being interviewed by Seacrest? She looked stunning, she always does!
- Too many interviews with Glee stars and D-listers! Bring on Clooney and DiCaprio
- Jenna Dewan is wearing a Romanian designer dress- I'm proud :) 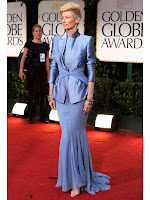 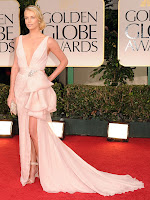 Supporting Actor Motion Picture: Christopher Plummer- well deserved and I love him; he is a fantastic person, an elegant, adequate, stylish man and his speech was very sweet, mentioning Ewan McGregor

Totally useless speech by HFPA president- but then again Jeremy Irons was there, and he is always charming


Best Score: The Artist. Surprising, NO trent reznor?, also"I'm sorry, I'm french" genius quote
Best Song: Masterpiece-Madonna- of course she won, she had to be there; "Uhm, uhm, I'm not French, I have no excuse"- you got that right. Long speech!

Another useless speech  by a turkish actress

Actor miniseries/tv movie: Idris Elba- Rock'n Rolla badass, good for him!
Brad Pitt introducing Ides of March - of course the camera were on Clooney  and Jolie, who was looking beautifully to him, as he was the only man in the world- perfect performance or true love?


Actress Comedy: Michelle Williams- obvious choice; I loved her speech, she has very sweet and charming, sincere and short.

Felicity Huffman&William H.Macy introducing through one cute song- nicest couple ever
Supporting Actress tv series: Jessica Lange
Madonna comes back with a mean comment to Gervais- funny?!?!!?
Foreign language film: A separation- considering the love for certain Hollywood celebrities, I was sure Jolie's film will get it, but I guess I was wrong
Actress Tv drama: Claire Danes- Homeland
Actor TV comedy: Matt LeBlanc

Reese Witherspoon is hot- she is, what? 40? kudos to her

Cecil B.Demile: Introduced by Sidney Potier and Helen Mirren, the award went to the fantastic Morgan Freeman- he deserves it and I am glad to see him in so many great movies (Seven, Shawshank Redemption etc, but Casket video was one of funniest thing I have ever seen). His speech was surprisingly short and sweet and funny!

When Angelina Jolie comes in, you can see Brad Pitt is one proud man, and he should be, AJ is flawless!
Director: Martin Scorsese- Hugo- hmm, interesting! Oh, and Leonardo DiCaprio just smiled- for the first and probably last time tonight- he's too cool for school, but nothing beats his BFF Marty
Comedy TV series: Modern Family

Actor Comedy: Jean Dujardin- The Artist- he is even trying to joke, gotta admire his french charming style

Actress Drama: Meryl Streep- Iron Lady- a little surprising, but I loved her impromptu speech, naming all of the great performers.

Oh come one, so many Smash and The Voice commercials, they are made up to be the God of television

Actor Drama- George Clooney- not surprised, but i'm not happy! Got to give him credit for Fassy and Pitt appreciation!

Picture Drama: The Descendants- no surprise for me here, but I doubt it will win the Oscar, just a hunch! Remember Social Network win last year?

Overall, I thought the pace was great, I wasn't bored, but I was dissapointed by Gervais, he was softer than last year! Who is willing to bet that Crystal is going to outperform him?

Congratulations to everyone! Bring on the Oscars!

P.S. Read my Shame review, I spent a lot of time on it and the movie is really good! This is the 4 am tired and hungry?!? Diana doing shameless promotion for her blog!

P.S.2. In a naughty, shameless game of Fuck, Marry, Kill, as I said on twitter, I would Fuck Fassbender, Marry Pitt and Kill Clooney! What about you?

Thank you and good night!