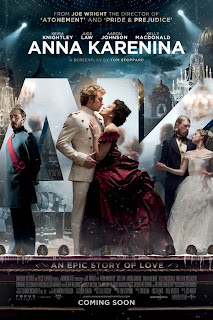 "There can only be misery or great happiness for us"

Recently I had the pleasure of seeing Anna Karenina and oh, what a treat that was, I loved it. As you might know, it tells the story of Anna, a married woman who starts a scandalous affair with a much younger man. Based on a book by Leo Tolstoi, with a screenplay by Tom Stoppard and directed by one of my favorites, Joe Wright, this wonderful Imperial Russian classic romance will enchant you, although not completely move you.

Anna, a faithful and loving woman to Alexei Karenin, a prominent figure in Russian politics, meets, in her trip to Moscow, Count Vronski, which is to be wed to Kitty, a close friend to Anna's brother, Oblonski (Matthew Macfadyen). After her departure, he realizes he can't let go and travels to Sankt Petersburg to see her again, and so things evolve into a scandalous affair that ruins, not only her married life and her reputation, but also her health. By the end, she goes crazy as she believes her love for Vronski is not enough anymore, and begins a paranoid, mood shifting phase of her life. Although their love is still strong and he does not give up on his mistress- he loves and understands her, despite all of her antics, things go south, and the end is dramatic.

As we would expect, Wright's vision and direction is what makes this movie shine- one of the most innovative, visually beautiful and interesting methods he used for Anna Karenina was the use of stages. How can I properly explain? The intermissions, the breaks from one scene to another where made as you were actually present in a theatre and you're seeing the decor move, but all done in a much more dynamic, fluid way. There is also a mix of slow and fast pace between some acts, with an almost musical-type feel to it, that made it even more charming. This combinations were all appropriately made to highlight either a character or a storyline. This definitely set the film apart in the beginning and made it more much more appealing. Unfortunately, that didn't continue throughout the whole film, and many observed and punished him for that. Still, it's a lovely method that I have rarely seem, so I was intrigued and entertained.

One other absolutely strong point is the art direction and all sets and costumes- the latter will definitely be a major contender for awards this season. Visually, few bad things can be said about it- I personally didn't find any flaws although I am sure some will. The cinematography is stunning, the use of close-ups and interesting shots makes the film much more magical and attractive and that gives the characters more life and passion. The score has the same details as Atonement, like, for example, the use of stamps as part of the orchestral piece. It works very well with the rest of the songs to create the atmosphere required for an Imperial Russian drama.

I do want to mention the dancing scenes- I particularly liked them because of how it was directed, but also because of the choreography and the lovely use of hands. It felt quite magical, like you were in a fairytale and everything floated gracefully; it all culminated with a much more frantic, angry moment of jealousy and passion, and that was beautifully scored, too.

The casting was quite on point, with few bad choices. Kera Knightley, as the main character, Anna Karenina, did an amazing job, but still, she didn't impress or stand out for me. Don't get me wrong, everything was very well acted, but I don't feel this is a memorable or awards worthy performance. As for Aaron Johnson, the Count Vronski, I started off thinking something's not right with him- it felt too gimmicky, not quite convinceable, but by the end I warmed up to him. He did a good job overall, especially in the second part. I think Jude Law had a challenging part, just because he had to stretch himself out of his comfort zone and it paid off- he gave a powerful, sincere performance. The standout for me was Matthew MacFayden- he shined in all of his scenes and gave a wonderful performance. I would push him for supporting actor awards, but I don't think he has any chances. The cast overall is very strong and all delivered: Kelly Macdonald, Olivia Williams, Emily Watson, Alicia Vikander, Domhnall Gleeson and so on.

As you can see, I was rather impressed by Anna Karenina- for me it worked in all levels: script, character development, performances, visual appeal, direction, entertainment, everything. But I am not saying it was perfect- one common opinion I have heard is that it isn't very consistent and that it lack some extreme emotion or passion in some parts, and I partly agree with that, but I was able to take that aside and enjoy it. I really do recommend it and I hope you like it (it will probably more entertaining for the female population than the male one, but men, please do see it).
Posted by Diana at 9:52 AM