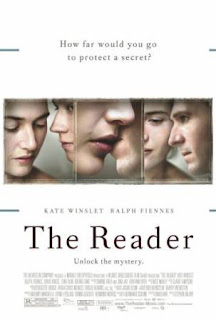 When I see a movie, one of the things I always watch intensly or try to figure out are the characters: who are they? How do they feel? What is their story? What drives them? Everytime a film starts and the story plays itself out, questions pop into my head; most of them get answered, but there are always few that remain, and they stick in my head for a long time, after the film is over. And although it bothers me, it is that unfinished business that keeps the film in my heart and head for a long time.

Seeing The Reader is a true example of that. I loved the movie: it had a beautiful, sad story, soothing music and great sets, but yet again my mind comes back to the characters.

Hanna, played fantastically by Kate Winslet, is a simple, straight-forwarded woman who lives a normal life, until she meets young Michael, played by David Kross (the old Michael is played by Ralph Fiennes). The affair starts rather oddly and continues throughout the summer, with moments of love making and reading, as he reads to the older woman every book he can get his hands on. It ends the same way, Hanna leaving without saying goodbye to heart-broken Michael.

That sudden disappereance changes Michael forever, stealing away all of his youth and passion.  After a few years, at a trial that he attends during his Law School years, he encounters Hana in a different, horrifing way, as the defendant in that case; she was a guard during Auswitchz. Since that moment on, the questions start popping in my head and they bother, actually ennoy me, as I can’t, just simply can’t, understand what is going through Michael’s head: is it sadness, shock and horror for the things she has done, loneliness, love and concern for her? Why didn’t he visit Hana in the prison? Why didn’t he save her by admitting to the court that she couldn’t read? Is the love he was for her stopping him? Or is it disgust?

I know the book has all the answers, or at least better explains part of the story, but it does surprise me. I wish it was more clearer...or maybe it is and the problem is me. Or maybe that’s the whole idea of the movie...

All I know is that The Reader is a great work of art and you should see it: for Kate Winslet and her well diserved Oscar, for the director’s view of things, for the music, for the fantastic young David Kross and for the intensity that Ralph Fiennes shows.
Posted by Diana at 9:14 AM