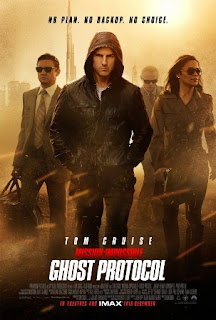 I went into this movie screening expecting a big, action-based movie with great scenes, guns, cars, and the infamous MI song; I wasn't dissapointed. It was a good movie, great for entertaining, lacking in other, more important aspects.

Plot-wise, nothing spectacular. Ethan Hunt must save the world, yet again. Tom Cruise is great in this part and has mastered the look, pose, stare, and manners of the super agent. Because Ethan Hunt is fantastic- never gets seriously injured, always lands on his feet, sexy in any situation, smarter than the 190 IQ guy and, oh, yeah, he can speak Russian.

The most appropriate scene to showcase mister secret agent in all his splendor is the sandstorm scene. Because, honestly, let's face it, NOTHING can stop Ethan Hunt, not even a fucking sandstorm.

The movie follows the classic action storyline: fast, eye-catching opening scene that triggers the biggest problem of the planet (you know, the usual: alien invasion, global distruction, mass massacre etc); for the next 1h and a half, the super guy tries to save it, going through at least 4 or 5 nail bitting sequences; classic example: Brandt(Jeremy Renner) holds THE suitcase out the window, while Hunt tries to convince him not to, whilst Benji (Simon Pegg) counts down the seconds to "death". Of course he didn't throw the suitcase, then the movie wouldn't have had the normal storyline and we can't have that, right?

All is well at the end, as expected, Hunt saves the world and you get your "all the heroes around one table, reflecting on how cool they are and what they will do next".

Character-wise, the shining star for me was Simon Pegg as the funny, quirky, computer-man Benji; in a world of cool stares and exploding machines, he lightened the mood and gave us a few laughs. I loved him! Paula Patton as Jane was nothing out of the ordinary- beautiful girl, did her job, said her lines, looked sexy and that is about it. Now, about Jeremy Renner- he is a little bit of an enigma for me: I can see the potential of a star, of a frontman, but I still don't have that immediate attraction to him- filling up the Jason Bourne part is going to be tough! You're probably expecting me to talk about the villain, but, as some already said, I didn't really consider him to be one- he was just a pawn in Ethan Hunt's plan to rescue everyone. Maybe he should have been portrayed more devilish, with more substance. The actor was fine, the part wasn't.

I have to mention the song, the MI song that kept popping up during the screening- I thought it was great and suitable for those scenes; usually you hear it during the crucial part of the movie, but this time, it was more frequent. The soundtrack was, also, very good!

As a wrap-up, I must say it is a rather good, entertaining movie, perfect for the holidays or going out with friends who you normally wouldn't bring to an indie, foreign or art-type movie. Everyone can enjoy this one!

p.s. I should warn some of you- I got a terrible headache afterwards- maybe it was the high volume in the cinema theatre, maybe it was too visual, but still, it can be tiring to the eyes. Don't sit too close to the screen (I didn't, and still...)!
Posted by Diana at 8:16 AM