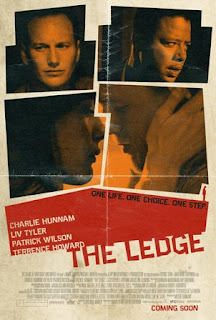 The Ledge is a movie I stumbled upon a couple of days ago! While looking on IMDb for different actors, I got to Charlie Hunman's profile and then discovered this film.

The premise is interesting, although not very original. A man(CH) gets involved with a sweet, shy, unsure woman(Liv Tyler), as her husband(Patrick Wilson) distances more and more every day. Terence Howard stars as the cop who tries to convince Gavin(CH) to get off the ledge.

The script was very good. I appreciated the dialogue and the topics Matthew Chapman, the director and scriptwriter, attacked for this movie, most especially religion, spirituality, purpose and so on. The scene between Joe and Gavin talking about religion is fantastic and holds a lot of truth in it; personally, I was leaning more to the non believer's side, although it was taking to the extremes in some points. The interaction between the two actors was also memorable on one of the last scenes, where Joe, the husband, delivers more of a monologue about the adultery and faith- brilliant.

With that I must acknowledge Patrick Wilson, who is amazing in the part of the god-loving, obsessive, scary husband who controls his wife and ultimately pushes the limit that his god gave him. This man does not dissapoint every time I see him on screen- never a bad performance, never a dull moment (maybe in some parts of Watchmen, but I still liked it). Blew me away in Hard Candy, blew me away in The Ledge. He is one of my favourite actors out there, and I hope to see more of him soon.

Charlie Hunman, the star of the movie, was good, but didn't reach the maximum- I still think he could have done more for his characters. I do love him in Sons of Anarchy and I think he has a bright future in front of him- now, if only he could get some decent parts in movies, not TV shows, that would be great. Apparently, he has a few projects lined up for the next years, including Pacific Rim(by del Torro), so remember his name.

What can I say about Liv Tyler?- always beautiful, always plays the part and I always love her, no matter what she does. Very interesting role for her, as Shana is a controled, constrained, shy and obedient woman who listens to her husband, but longs for something more, for someone who can set her free. And there comes Gavin and it works...for a while. The chemistry is definitely there and there were even rumors of an off-screen relationship.

I won't spoil the end, but what I can say about the movie, in general, is that it had some cliches and, in some points, it was predictable and overly dramatical, but overall, I liked it! Not the best, as it had its ups and downs and I am sure most of you would not like it, but maybe you should give it a try next time you see the DVD or have it on Netflix/LoveFilm! Let me know what you think about it!

I leave you with a nice quote from a Shockya review "Hunnam and Tyler have a nice chemistry, and the latter in particular captures how feminine vulnerability can sometimes slowly melt into attraction if met with the warmth of an honest and respectful embrace.
Read more: http://www.shockya.com/news/2011/07/08/the-ledge-movie-review/#ixzz1g3sQS4vj"
Posted by Diana at 12:15 PM