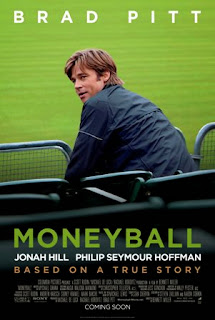 Moneyball is a drama set in 2001 about a baseball general manager who decides to change the game by relying on something completely different from what it is used on a regular basis- mathematical, or rather statistical methods that technically guarantee you a win. At first, as expected, nobody believes in him, but people start changing their minds after the team starts winning game after game, reaching a ground-breaking record of 20 wins in a row.

A few hours have gone by and I can't really say if I loved it or liked it or if I am indiferent to it. It is a very good movie- the direction is on point, the soundtrack, appropriate, the cinematography is beautiful and suitable for the atmosphere, the script is great, the acting is superb, but.....BUT it just doesn't seem perfect, something is missing. Maybe it is the fact that you don't actually have a maximum point that can be reached or a cliffhanger (the 20th game could classify as one, but wasn't fully explored, as it should have been), or maybe it's the fact that none of the characters really stand out, except Billy Beane. Everything is in place, but the passion is missing, that extra touch that everyone wants, it's not there. In the end I just couldn't get emotionally attached to it.

Brad Pitt and Jonah Hill are clear standouts; both characters are not that interesting, they don't develop as you would imagine, but that's the beauty of it, in a way. Their performance truly explores the sense of realness and relatability that most people try to put on screen. Mister Pitt delivers, and showcases his talent by portraying an interesting man in a convincing way, perfect on the details and never giving too much or too little (maybe on the throwing things around scenes- why do people do that in movies? it always seems overracted). I can definitely see the reason behind the river of nominations going his way, but is it better then Curious Case of Benjamin Button? Or Tree of Life? or Fight Club? or many other of his movies? Not quite, but hey, he needs to be recognized for his talent sometime, right?

Moreover, I was pleasantly surprised by Jonah Hill; considering the boring part he was giving, he still managed to make it more human and interesting. Philip Seymour Hoffman was underused and faded into the lines, and the same can be said by Chris Pratt.

I guess I just have to conclude that Moneyball didn't quite make it to the finish line, to say so, from my point of view. It didn't stretch as much as it could and should have; a good try, but not the best! Rent it, you are not losing anything mind blowing by waiting for a couple of months!
Posted by Diana at 8:24 AM