Elizabeth: The Golden Age and the Clive Owen Appreciation post 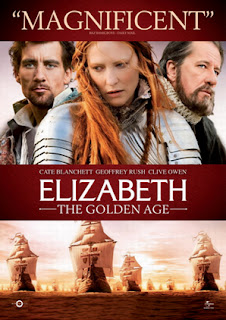 Elizabeth: The Golden Age follows the story of the Virgin Queen in the 1500s trying to resist the Spanish Armada, and the love and attraction she has for sir Walter Raleigh, a handsome sailor/pirate who just conquered a part of the New World. Things don't run smoothly, as her lady in waiting, Bess becames involved with the gentleman.

Before reaching the maximum point, for me at least, let's first discuss the obvious. As to be expected, Cate Blanchett is wonderful and delivers a very interesting performance of a strange, rather peculiar woman who must save her country and act in a given way, although she wants different things, like going in adventures or having relations with simple, normal sailors. That's why she pushes Bess towards Raleigh, so the girl can experience what the queen wants to, but can't, because of her status.  Abbie Cornish, as the lovely girl, is also a pleasant presence, but doesn't really surprise us. Other mentionable characters include Samantha Morton(10+ for the Traitor and Hanging scene), as Mary Stuart and Eddie Redmayne, a very young, foolish Redmayne. The costume design is beautiful and it rightfully won the Oscar, and the direction is suitable for this kind of period drama. Shekhar Kapur? Never heard of him before, I must do some research about him.

Moving on to the most important thing- the star; as always, for me, it's Clive Owen. I must confess a long lasting crush I have for him; what is not to love? Tall, dark, handsome, with green eyes, British, fantastic actor, sober, misterious, a man- a real man, in the right sense of the word. He is just perfect! Whenever he smirks, I melt a little bit more; whenever he speaks, I listen and could continue to listen for hours (like Elizabeth in one scene of the movie)- his charm is undeniable, at least for me it is. In this movie he has an interesting chemistry with Cate, palpable, but not your regular one, maybe because she is such a peculiar character. One of the great scenes to prove it is the confruntation between the two regarding his departure to the new world- "You cannot leave England", a vulnerable Elizabeth says.

All in all, the movie is good, but not outstanding. If you like period drama, you should give it a try!

p.s. If you want more of that special British charm, I leave you with a picture, an 8 minute clip of a BWM commercial (please ignore Madonna, she is horrible in it) and a scene of one of his movies- maybe then you will approve! :) 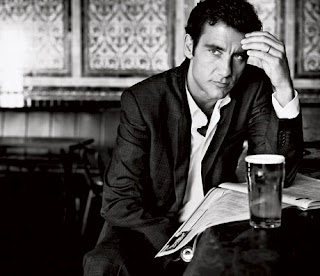 BMW commercial Star
Clip from Inside Man- great movie, I should really see it again, it's been ages