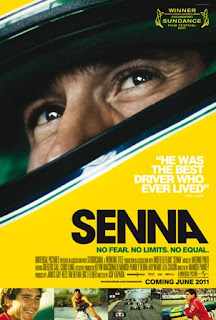 Senna is a 2011 documentary about the life of race car driver Ayrton Senna, one of the best and the most famous people in Formula 1 history.

The story follows the Brazilian from the beginning of his career to his tragic ending. The script takes you through all of the important steps who took in order to become the man he is known to be. From the race which he started in the 13th place, but finished in the 2nd one, to his first World Championship win in 1988, his controversy with Alain Prost in 1989, all the way through his last season at Williams, the company who was responsible for his tragic death during one of the races. Extra bit for Formula 1 lovers or, at least, for those who follow the sport from time to time: you do see the beginning of Rubens Barichello and Michael Schumacher's careers.

I must say I didn't knew too much about him beforehand, so I think the documentary showed a beautiful side of the driver and it all worked out well. Ayrton was a very strong, competitive man, but also, with a lot of faith in him. He once said "If you no longer go for a gap that exists, you are no longer a racing driver" and he is right; plus, you can apply that saying in more then one context, can't you? He understood the sport, he loved it, he was the best at it and he fought for what he believed in. Anyone can appreciate that.

His unavoidable death was sad, but for me, personally, wasn't properly explained or expressed in the right way. You build up a movie like this one, you know everyone is expecting the shocking part, but when you get to it, you use 1 minute and then straight to the funeral; I was a little underwhelmed by it. The saddest moment was the funeral, when we get to see people from his life saying goodbye, his before and after relationships- it got to me.

Senna is probably one of the best documentaries I have seen. I absolutely loved the fact that they used ONLY footage of him and didn't add unnecessary shots, just background voices explaining the situation and how Senna reacted to it. The music suited the vibe perfectly and the editing was superb. I think that even for non-Formula 1 people, this can be entertaining.

Overall, it is a film worth seeing and you should watch it when you have the chance!