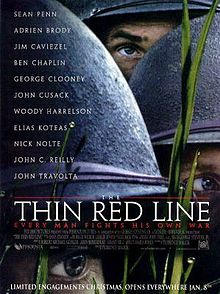 I have a love and hate relationship with Terence Malick. You know that feeling when you're pissed off at someone, say your girlfriend/boyfriend, and you just want to slap him/her, but, in the same time, god, you just love her/him and get the urge to kiss. When I saw Tree of Life, I was in a constant battle between slapping and kissing!This movie had a different situation!

"The thin red line" is a fantastic movie! Everything is wonderful, from the cinematography, to the script, direction, music and most definitely, the acting! It still has some weak points, but still...

Let's start from the beginning! I love the fact that you can, firstly, hear the voice and feel the attitude of a character, then see him in action- a beautiful way of introducing the men and showing us, as the movie progresses, how they really are.

All of the shooting scenes and the missions seem real and the best part is that Malick doesn't focuses his attention on the blood or actual fighting, but on the reactions and emotions of the soldiers. They are the core of this movie and it is just a way for us to understand and relate to those who have lived this kind of horror. You can find anything in the middle of the action, from men going crazy to others who indifferently sit next to dying soldiers. The war has transformed them and Malick shows us how through a 170 minute journey into their mind and soul.

The cast was exceptional and recognizable, even if you don't watch a lot of movies: Nick Nolte, Sean Penn, John Travolta, Adrien Brody, Woody Harelson, John C.Reilly, Jared Leto, John Cussack and others. Nick Nolte, especially, is crazy good as the man in charge of the island, who has to go down into the battlefield to take charge when his captain(Elias Koteas) can't.

The key character and actor in this, for me, was James Caviezel. There is just something about him: it draws people in, his eyes, his calm and numbness, his raw emotions are wonderfully displayed. He is the heart and soul of the battalion and of this movie.

One thing I still don't like about the Terence Malick movies is the voice-overs. I understand they are meant to give substance and more meaning to the story and create an atmosphere, but most of the time, for me anyway, it is distracting and I just give up, all together, listening to it and prefer to watch the action on screen! Plus, it can be a little boring to watch for some- 170 minutes!

Fantastic movie, I really hope you will see it, if you haven't already!
Posted by Diana at 9:01 AM