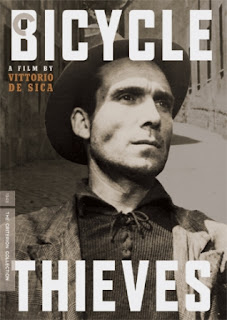 In my quest to expand my cinema knowledge, I decided to watch a couple of classic Italian movies, and the first one was The Bicycle Thieves by Vittorio di Sica.

Taking into consideration that it was the first in this genre that I saw, I can say I liked it, but wasn’t blown away by it. Maybe it was the fact that film never really got my attention until the last 5 minutes- it never made up forget everything around me and concentrate on the story!

But let’s start with the beginning. The two main characters, the father and son, are both fantastic and interpret their part in wonderful way. It doesn’t even feel like a performance, because it is so real. I especially loved Bruno, the sweet, but strong kid who follows his father in the hunt for the bicycle. The hunt actually turned out to be a journey they both took; one that made them bond, but didn’t go the way they planned.

One thing that I noticed and loved about the film: the story, the place, the characters, the dialogue, everything is real; you know it is a normal situation that you can find anytime, anywhere. The beauty of it lies in the interpretation and the little details (the sets, the music). Rome reminded me a little of Bucharest, especially the Buzesti/North Station part, I don’t know why. (Yes, I am originally from Romania)

For me, the best part was the ending. The last 10 minutes were crucial and really brought out the importance and the development of the characters. The decision scene is very well executed in every way(direction, acting, music etc) and I guess you can call the walk that two take back home, The Walk of Shame, as the father realises not only that he didn’t get the bicycle back, but also that he let his son and his family down, in every way.

Sometimes, the ending changes my whole perspective on a movie. That’s what happened here! I can say that it is a beautiful classic and you should see it!
Posted by Diana at 9:40 AM