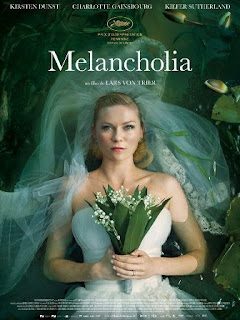 This movie, like Tree of Life, cut me in half. On one hand, I like the story, some of the shots, the ending, on the other side, it gets boring after a while, and some scenes are just fillers and the artistic procentage is too high for me.

Let's go from the beginning. The opening image of Kirsten Dunst tells me that I am in for a ride to remember. The first shots, artistic and in slow motion, just scream not your typical drama. By this point I am wondering why did I want to see this movie, but I am equally intrigued and a little scared.

Part one features Justine through her night as a bride, her feelings ranging from happily giggling into the backseat of a limo with Michael (A.Skarsgard), her husband, to robotically smiling to her guests at her reception. You can't help wondering what is going on? Why is she so sad, afraid, melancholic? Everyone tries to comfort her and make her feel better, they try to help her carry on with the ceremony, but she just can't and won't allow herself to let go and enjoy. Michael is very supportive and even lets her have her moment when she doesn't want to sleep together. I was waiting for the moment when he would just freak out, tired of her moaning and say "Bitch, you're crazy, snap out of it", but he didn't, and she walked out, and did something really stupid. Women, I tell you, sometimes you have not idea what's going on in that mind of theirs. The first part was ok, nothing out of the ordinary. Good performances from Kirsten Dunst, Skarsgard (junior and senior), K.Sutherland and Charlotte Rampling, as the sisters' mother.

Part two focuses on Claire, played beautifully by Charlotte Gainsbourg. I must admit, this is the part where my level of patience was so slow, that I wrote the rant of the week post. Some scenes seemed just fillers for me and Dunst was getting on my nerves so much, that I hated it, I just didn't want to see her on screen. She, well her character, let her fear and emotions get a hold of her and just surrunded to them, never trying, never caring for the ones around her. No matter how much Claire wanted to help, she couldn't. I liked her character more, as I felt it to be more real, more relateable. You could comprehend Claire's anxiety and panic, but Claire's state of mind is very unclear. Their development go in opposite directions: as Justine blocks everything around her and becomes a statue, more or less, Claire lets her fear of the planet control her and it makes her more anxious by the minute; that's when the claustrophobia kicks in- she realises it is getting closer. The last part of the movie was better, because we can see the transformation of the two sisters, we can understand and feel the pressure of the planet Meancholia on Earth and on the people in it and the last scene was beautifully done.

Like I said, I am torn in the middle. Although I disliked some parts, I could relate to others. I can't say I love it, but I don't hate it, either. That's the worst situation!

Did you see it?What did you think?