Fridays are the best: A streetcar named Desire

Today, you will read a very interesting review: it is the first one I wrote, the one that inspired this blog and my passion to discover and see as many movies I can! It is my first attempt, so bare with me!I hope you like it! 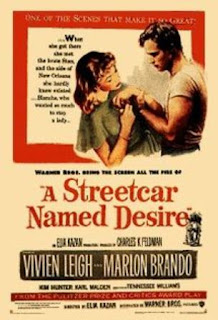 A streetcar named Desire, a clasic movie, a fantastic one that was rightly named one of the best in the history of cinematography.

I can whole-heartly say that it changed me. It was the movie that made open my laptop and write about it....and then find other movies just like this one. I was blown away by everything: the story, the lighting (I now understand the importance of it- well, mostly), the setting, the way the camera moved, the music, and most definately, by the characters.

How can I explain it? The film, the story pushed the characters forward, made you pay interest only to them, to their reactions, to their body language. It made you, well, actually, it made me realize and understand their story, their motivations.

Stanley, played by an amazingly good-looking and great actor- Marlon Brando, was the surprise. He has the whole package- tall, hot, sexy, smart, with an attitude- a real man that you can hardly find in Hollywood these days. As I said before, attitude is everything and he nailed the part of Stanley, Stella’s husband and the reason of Blanche’s breakdown; he eventually pushes her over the limit, by being honest, something she is not used to. 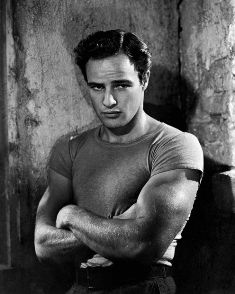 Bonus just for the ladies

Blanche is a very complex character. At the beginning, she gives you the impression of a „whiny bitch” and I, for one, was quite irritated by her. She overreacted everything, although I know it is a common trade for that time. I guess she is hiding her sorrow behind that over dramatized class. Although the annoince continues through out the film, it becomes intriguing...what has she done, who is she?  After we do find out more about her background, we start to understand the way she acts, her story. I loved the scene with the young man collecting money, who reminds Blanche of her late husband, and especially the amazing acting, gestures, ease of interpreting and my favorite, the easiest transition at Mitch’s arrival! The second half of the movie, especially the last 15 minutes are fantastic, and Vivien Leigh doesn’t dissapoint at all; the two memorable scenes- first with Mitch („Yes, I have had many meetings with strangers”, showing, for the first time, her true self and her face), the second, with Stanley (in which Marlon Brando’s character demascs Blanche) are amazing and show the true art of acting from these fine artists.

I was impressed by Vivien Leigh’s acting, but I just read that she was suffering from bipolar disease in real life, so maybe that changes just a bit the situation.

Stella is the supporting character that holds together the whole film, but doesn’t stand out, for me anyway, most of the time. I do remember the end scene, where she runs up the stairs with the child, saying she won’t talk to Stanley again, but knowing she will, because she has no choice and because she loves him.
It is one the greatest movies I have ever seen and I really hope you will see it soon!

P.S. Interesting note: One particular thing i observed and it got me thinking was the smoking. First of all, smoking in the 50s is like texting  of our days(maybe it is a bad example, but you get my point). Everyone does it with such ease, that it looks so natural and pleasant.  Second of all, I now know why women were so succesfull back then: the line „ Do you have a light?”, followed by a quick, sultry gaze got a man on his knees....too bad it doesn’t work nowadays!
Posted by Diana at 8:55 AM