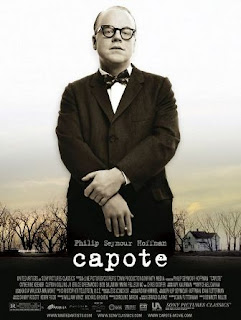 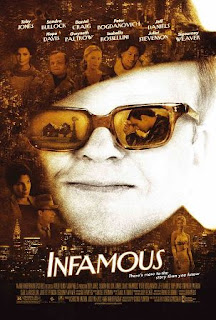 Capote and Infamous, two wonderful films about Truman Capote and his process of writing In Cold Blood, were released very close one to another, in 2005 and 2006. The first was based on the book of Gerald Clarke, the second on George Plimpton's novel. Capote had Philip Seymour Hoffman(PSH) playing Truman Capote, while Infamous casted Toby Jones(TJ). Harper Lee, an important character and friend to the author was portrayed by both Catherine Keener and Sandra Bullock. Although the story and the main ideas of the film are almost identical, the movies are different in many ways.

First of all, Infamous is visibly more colourful, with a larger array of characters, more celebrities, full of life, extravagant, noisy, vibrant in many ways. The film is lighter and shows the relationship between the novelist and the prisoner in a much violent, daring, in-your-face way. Capote is quiet, somber, with mixed emotions of fear, melancholia, sadness, betrayal, love and others; the relationship is displayed in a discrete way and you can sense there is more to them then meets the eye.

Second of all, in the 2006 adaptation, you learn more about the killers and their background from the actual individuals, you see, hear, clearly understand their motivation and drive. They seem simple, you can either love them or hate them, there is nothing to hide. In the 2005 one, you get to know the two men, especially Perry Smith through the eyes of Truman Capote. He is the backbone, he is the voice of reason, he tells you what happened; you feel what he feels.

Third of all, the performances are rather opposite. While Toby Jones is exuberant, excentric, full of life, sometimes caricaturistic, PSH portrays Truman Capote in a much more natural, interesting, complex way; his performance has layers, in-depth aspects to it that gives the movie more drama, more passion, intrigue and emotion. He does deserve the Oscar for this role. As Harper Lee, the two ladies have a different approach to it, as well. Catherine Keener seems borned in this role, it is natural, but with Sandra Bullock you can feel the artistry there, you can see the acting, but it'a beautiful thing to watch- I think she gave a wonderful performance.

Infamous is above, bubblying on the surface, whilst Capote is much more subtile and complex. Overall, I'd probably choose Capote, although Infamous has many strong points as well.

Did you watch them?Which one would you choose?
Posted by Diana at 10:25 PM