As much as I like watching movies, sometimes reading a book is even better. So, from time to time, you might get some book reviews/recommendations. Hope you like it! Today: Grapes of Wrath! 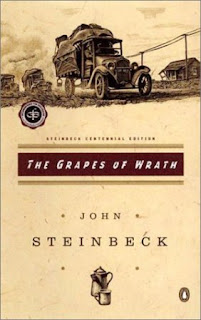 John Steinbeck is one of favourite authors, ever since I read East of Eden, which is fantastic, especially when character development is such an important part of the story.

I must admit, it took me a long time to finish Grapes of wrath, not because I didn’t like it, it just didn’t have enough action to keep me hooked- not in the first ¾ of the book, that is.

All in all, I consider it to be a masterpiece, or very close to it. What I like about Steinbeck is that he gives the most interesting, complex, yet very real characters. It’s fantastic how well he describes them and how he shows us different sides of a character’s personality developing with each page you turn.  We have the Joad family, probably one of the most iconic families in the history of American literature; and boy, can you learn from the Joads: they never give up, they always want more from themselves, constantly pushing each other to make it to the next day. One perfect is Ma Joad, who basically holds the reign of her family, keeping them united. She is strong, silent, hardworking, and always attentive to each member, trying to jungle not only the normal duties of a woman, but also of the man, as well, since Pa Joad can’t make up his mind half of the time. She commands respect and always knows what to do, even in the worst situation.

Every little character is surprising and wonderful in his own way: Tom, Rosasharon, Casy, Al, and Uncle John-each one takes us more and more into the sad actions of that period of time.  I could write at least two pages about them individually, but I think you should read the book and see for yourself the world Steinbeck created. That struggle is what it brings them down, but holds them together as one. That struggle infuriates you, makes you sad, it takes you to another level. It’s not even fiction in the real sense, as those events really happened in America in those years.

Another thing I liked is the alternation between the long chapters about the Joads adventure, with the small, rather descriptive chapters about certain topics that are vital to the storyline, just to make us understand better the circumstances.

The end was moving, but a little unsatisfying to me, because it didn’t really provide closure for some characters, but then again, maybe sometimes it’s good to leave things up in the air- the reader can interpret it anyway he wants.

As I said before, it is a masterpiece and you should definitely read it- and put East of Eden on your list, too! They are both amazing!

I am planning to see the movie soon, so I will post the review for that, as well!

Have you read the book or seen the movie?What do you think?
Posted by Diana at 9:36 AM

Email ThisBlogThis!Share to TwitterShare to FacebookShare to Pinterest
Labels: book, Grapes of Wrath, Joad family, pick of the day, Steinbeck