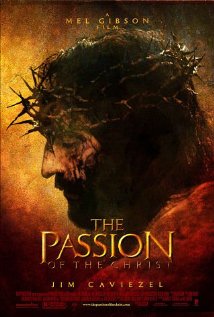 Where do I begin talking about this film? It is about religion, about the story of Jesus Christ and what he went through. It is directed by Mel Gibson and it stars James Caviezel, Monica Belluci, Maia Morgenstern and others. It is a very special film.

Mel Gibson decided to write, produce and direct a movie about a delicate subject! How can you properly explain this story in motion picture without being too Hollywood or exagerated in some parts? You can't, because you don't actually know what happened, you have only the Bible to guide you. It had its flaws, I am sure some hated it and at certain times the violence was too much, but you can't not be touched by it, by the way it was portrayed.

Religion is not something I talk about because I do not consider myself a religious person, but I can say about me that when something moves me, when I can relate or feel or understand the emotions it is trying to transmit, it can have a great impact over me. I cried during Passion of Christ two times: first, when Mary gets close to Jesus in his way to the crucification point, after John takes her there, and the second time, when he arrives and they pint him to the cross. It is one of the most disturbing, moving scenes I have ever seen. Sometimes I wonder: am I that easy to manipulate? am I weak? I hope I am not, because that scene should raise some emotions in everyone's heart.

I don't want to get into details and say Mel Gibson didn't follow the exact Testament or that he got something wrong, after all it is a movie. I found it interesting, but appropriate, that he used the original language for it- that must have been an extra point of pressure for the actors. If we should start discussing and disecting this movie, it would take ages and this is not a place for it- I don't think we have enough knowledge or wisdom to do it!

What we can do is enjoy a great movie and be impressed by its actors. James Caviezel is fantastic- I can't even begin to imagine the pressure of the role and how demanding it must have been to play that part. Just think about the emotional conection and the pain he had to portray for it; I respect him just for that, just for trying. Sure, it wasn't perfect, sometimes it looked overacted, by I understand him.

Another amazing performance is Mary, played by Maia Morgenstern. Now, I can proudly say that this wonderful woman is a known and loved Romanian actress and I had the chance to meet her at a local event. She is so elegant, kind and inspiring and has a special aura about her that attracts people. I thought she delivered a great performance.

Now it's time to see what IMDb has to say!The Oscars nominated it just for Make-up and Sound?Really?Why?I mean, why not acknowledge the passion and commitment of James Caviezel, if not Maia Morgenstern? Is it because of Mel Gibson?

Anyway, as you can see, I was touched by it and I loved it!