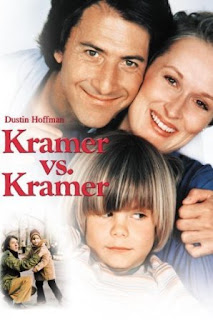 Kramer vs Kramer is a very good movie. Behind the great acting performances, the direction, the cinematograpy, the music etc, there lies an important story, beautifully told, that raises up questions, it makes you think, it moves you and it makes you analyze the life we live in. I loved Ted’s testimony, when he said something like “Why are women automatically thought to be better parents then the men?”, just summarising the film in one line and raising an important issue to be discussed in America. He argues that he loves his son very much, but also agrees that it was his fault that their marriage had fallen apart. He grows so much during the development of the story that you start understanding him and rooting for him and his son.

Actually, I never really knew or fully understood that Dustin Hoffman was such an amazing actor until this movie. As far as technique, movement, expression, seriousness, he is perfect, just perfect. And in the part of a father trying to raise his 6 year son, he rightfully deserved his Oscar, because his interpretation was that good, that I believed and felt everything he said and done.  Merryl Streep, as amazingly talented and beautiful she is, in the movie, for me, at least, was pretty good, as well, but not in the same level as Hoffman.

It’s a classic and you should watch it! I enjoyed it!

What do you usually like or what does it interest you most in a movie? The plot development or the character one?
Posted by Diana at 9:57 AM