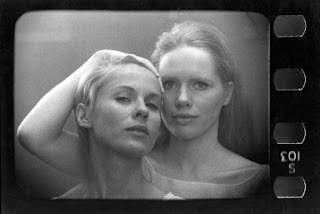 Having heard so much about Ingmar Bergman recently, I decided to watch one of his movies, just to see what the hype was all about. My first try was Persona and I must say I really liked it.

The beginning is creepy, yet interesting and strangely fascinating- it's artistic, yet it is different, in a good way; maybe it's the way it was shot, the language, maybe it's because it's black and white, I don't know, but it works.  Also, I liked the way he showed the credits, interwining them with pictures of the characters.

The story follows two women: Elisabet Volger, an actress who, after a meltdown, is committed to a hospital and giving into the care of Alma, a nurse. After the doctor sees that Elisabet still won't talk, she sends both her and Alma to her summer house on the coast. The movies follows the development of their relationship and the downfall of Alma, influenced by the constant silence of mrs Volger.

There were some amazing scenes that I have to mention. The one in which the doctor tells Elisabet what's wrong with her-clear and simple-"Your hiding place is not impenetrable. Life sweeps in through everywhere and you are obliged to react.", perfectly concluding her state of mind; she prefers to hide behind her silence then face the real world.The scenes in the house where Alma confides in her silent patient are wonderful, simple, and we get to know more about the nurse. As the movie progresses, Alma lets go of her fears and gives in, leading to a personal crisis that it's not so easy to explain. One of the scenes in particular was strangely appealing and exciting, and by that I mean the story of her day on the beach with Katarina- it was so interesting to see the way she describes it, her gestures, Elisabet's gestures and reactions.

Two other scenes stand out and are exceptionally done in all points of view (direction, camera movement, performance, music etc)- Alma running to say sorry on the beach and the discussion between  the two women about mrs Volger's son. The latter one was very special and innovative and I liked the fact that we can see both of the women reacting to the words and story. It is something that I have never seen before. The two leading ladies,Bibi Andersson and Liv Ullmann, are stunning and give beautiful, complex performances.

I must admit that I loved the film. Yes, it is artistic and it deals with existential themes (just like Tree of Life or Melancholia), but Bergman portrays it  in a very appealing manner, in a smart and interesting way and it captures your attention. I also have to admit that the last part, the actual meltdown of Alma, was not very clear to me, I didn't quite understand every nuance of it. Like someone said, maybe this was not the best Bergman film to start with. I will give it another try after a few more.

Persona might have just turned me into a Bergman fan. I will definitely try more of his films! Please do check it out if you have the chance!