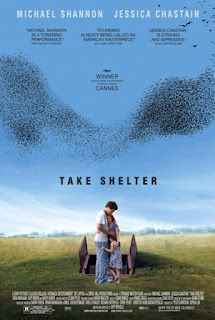 Sunday was a beautiful, productive day for me and I love it!

I went and saw Take Shelter. Previous to that, I had heard many wonderful things about it and I was looking forward to catch it at the London Film Festival.

Let's start with the good things. Michael Shannon gives his best performance to date and one of the best of the year as Curtis, a 30-something working man who starts having hallucinations about an apocalyptic event. I loved the way he interpreted the part, the emotions, the insecurities and the crazyness he showed during those 2 hours. He is brilliant! Also a very pleasant surprise was Jessica Chastain, who is the revelation of the year for me- she's not just beautiful and talented, but possesses a great quality that just attracts you to her, a very old Hollywood vibe. I think she has a bright future ahead of her and I expect great things from her. Chastain won't get a nomination for her role (unless no other big names surge ahead), but I sure hope Shannon does- he truly deserves it!

Another big thumbs up for the script. I thought the idea was original and I liked the development of the movie, especially the line of actions that lead to the end; Jeff Nichols delivers both as a screenwriter and as a director.

Now it's time to cut some points off: it lost my attention numerous times during the screening. I always say that if a movie doesn't make you check your watch, then it is a good one or at least an interesting, worthwhile one. I did check my watch on this one and my mind started wondering what should I do after the movie. I am not saying it wasn't good, because it was, but it was lacking in some areas. It was like an EKG, who spikes at certain times, but usually stays in normal levels throughout the day.

The end was surprising and I think http://nevertooearlymoviepredictions.blogspot.com/2011/10/what-i-saw-take-shelter.html is a great article if you want to know more, especially his/her 3 options of what the ending was trying to say! Hope you don't mind I linked your website!

Overall, it was a good movie, but if I were you, I would see it on DVD or wait for it to be online!

Today is the last London Film Festival I will be checking out- Martha Marcy May Marlene- review tonight or tomorrow!
Posted by Diana at 10:39 AM