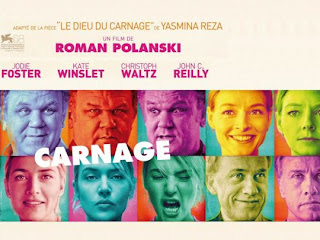 4th movie at the London Film Festival and I am still loving it! Today I went to see Carnage!

I must admit, from the beginning, that I am not familiar with Roman Polanski's work, but if the rest of his movies are similar to this one, I am willing to give a try.

I never thought you can have an interesting movie, with smart, funny lines and great characters, in only one location- an apartment! 90 minutes and I think I took only one look at my watch! Carnage was amazing and all due to the 4 main actors: Christopher Waltz, Kate Winslet, Jodie Foster and John C.Reily.

They take the film to the next level and carry the action, the entertainment and the drama. It is a tough job, but they are great at it. Waltz and Foster and perfect and give a wonderful performance, while Reily and Winslet are strong, as well, but they don't over shine the first two. I can't explain the characters here because you learn so much about them in 90 minutes- I would spoil you the fun of discovering them for yourself, which you should definitely do!

Clearly, the script is derived by a play, The God of Carnage, which Polanski adapted to the big screen. As you might think, normally, 90 minutes in one location is a very though thing to shoot, especially if you plan to keep the attention of the audience. They are very few movies who dare to do that (Phonebooth sounds similar and it worked there, as well, as I recall), but he manages to do that in a beautiful manner, relaying only on his actors and quick paced script.

Overall, it is a good movie and you should definitely give it a try! It is an interesting experience!
Posted by Diana at 11:50 PM