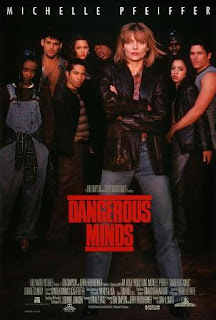 Great movie! I loved almost everything about it (except some storylines, they are so predictable). It all seems so raw, so real: the music, the scenary, all of the characters, nothing seems faked or acted. It brings back the 90s mood and makes you nostalgic, but also wanting to hear some „old music”! (Coolio-Gangsta's Paradise)

One of the things that stuck in my head is something the character Raoul says. I’m not going to give the direct quote, just paraphrase it. When the cops took him to the car, miss Johnson comes and asks him why did he do it. Raul says that he must fight for himself, that if he didn’t, people will think he is weak and he couldn’t walk with his head up high anymore. He said that if America wouldn’t stand up for itself, anyone would attack it. I understood what he was saying...because it is partially true. One of the reasons America is so strong as a nation is because it fought all the way to the top and didn’t stop at anything...even if it was too fast, too stupid or too risque. It didn’t had the wisdom of the European, but it had guts and power. That’s one way to succed!

Long story short: good movie! If you’re in the mood for some 90s music or vibe, check it out!
Posted by Diana at 3:07 PM