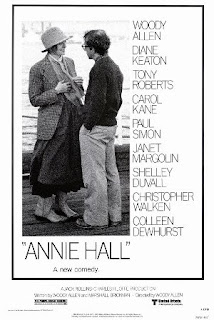 Annie Hall is a charming story about the relationship between Annie Hall and Alvy Singer aka Woody Allen. It was an interesting movie, with a great script, funny lines and many moments of introspective thought, because that’s what he likes. The film itself is about Woody Allen, with Woody Allen, directed and written by him. Now, don’t get me wrong, he is a fascinating man and I am sure a conversation with him is something a lot of people would die for, but let’s face it, a relationship? Any woman would go mad because he is special and he makes you feel “special”, too.

After just seeing Midnight in Paris a couple of weeks ago, I can really see the fact the he matured a lot and that he thinks in a more organized, structured, objective way now, in 2011. His 1977 self was very chaotic, it feels like he had so many ideas and concepts he wanted to implemented and didn’t really knew how to put it all together in a convincing way. But it was a great try!

There were some great scenes in it that I will remember: the dialogue scene in her house, on the terrace, about photography, meeting the parents and brother(nice surprise by Christopher Walken), the walk after her first performance etc.  and some great quotes, as well: “Life is divided between the horrible and the miserable” or the final one:

“After that it got pretty late, and we both had to go, but it was great seeing Annie again. I... I realized what a terrific person she was, and.. how much fun it was just knowing her; and I... I, I thought of that old joke, y'know, the, this... this guy goes to a psychiatrist and says, "Doc, uh, my brother's crazy; he thinks he's a chicken." And, uh, the doctor says, "Well, why don't you turn him in?" The guy says, "I would, but I need the eggs." Well, I guess that's pretty much now how I feel about relationships; y'know, they're totally irrational, and crazy, and absurd, and... but, uh, I guess we keep goin' through it because, uh, most of us... need the eggs.”

Diane Keaton is wonderful in this role, it fits her to a glove and I love the scene after the tennis match, she is adorable. Woody Allen is Woody Allen and we can all expect greatness from him!

Overall, an enjoyable movie, although not entirely captivating! The end made me reconsider some points in my review!

Do you like Woody Allen movies? Which one is your favourite?
Posted by Diana at 12:54 PM