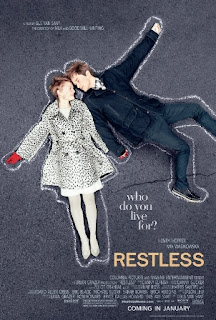 "Restless" was a little bit of a game changer for me. Watching this movie was an experience I will not forget anytime soon.

It tells the story of two young people, Annabel and Enoch, who share an interest for death and funerals, and the development of their romance. The two characters are strange, awkward, funny and so loveable, that you can't help falling for them, worrying for them and rooting for their love story, although we all know the ending will not be pretty.

Mia Wasikowska is wonderful as the sweet, energetic and calm Annabel; she just surprises me every time I see her on screen and this part is something she hasn't done before...and I love her for that. The big surprise was Henry Hopper, the son of the late Dennis Hopper, who, for his first leading part, was amazing as the sad, unsure Enoch. Great supporting parts were provided by Schuyler Fisk (Annabel's sister) and Ryo Kase (Enoch's ghost friend). The script, the story is pretty simple and straight-forward, but the magic lies in their interaction, the way it was shot, the cinematography, the soundtrack...it creates a great background for their love story to develop. Some reviews were not as kind as mine, but please go see it before you make up your mind.

This film was an emotional rollercoaster: at the beginning, you're curious, afterwards you enjoy their sweet romance, then you feel anger for Enoch's inability to help her, and in the end you just cry. It was one of saddest, heartbreaking movies I have ever seen. Don't think the end was shocking or anything, it wasn't, but the simple things that we were all expecting to happen were portrayed in such a way that no one left the theater when the credits rolled. You could hear some whispers, some quiet sobbing, but everyone was affected by it...I have never seen anything like that before. When I left the room, I could see that everyone had tears in their eyes, just like me; I cried.

Afterwards, I decided to write the review in a Starbucks. I never know if it's better to write right after you saw a film or just let it past a couple of hours. Usually my best ones are written minutes after seeing a movie. The sensation I had after this one was overwhelming: I can't really put my finger on it, but I was very impressed by it. What I can tell you that one feeling has stayed with me: I wish, one day, my film could trigger these emotions in someone's heart just like it did to me.

"Restless" will probably not have the same effect on you, maybe you will think it's boring or just a silly romance, but please do give a try and I hope you like it as much as I did! It has become one of my favorite movies of the year!
Posted by Diana at 10:26 AM