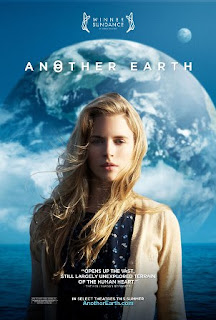 Recently, I saw the trailer of Another Earth in a cinema and loved it- the idea was like nothing I've ever heard, it was edited in a good way, the main character seemed very interesting, so I wanted to see it as soon as I could!

I did watch it last night! To put it simply, as I said it on Twitter, despite it's numerous flaws, I kinda of liked it!

Let's go from the beginning! The film tells the story of a young girl who, one night, after a party, whilst looking for the new planet that was discovered, crashes into another car, killing the woman and the child and leaving the father in a coma. After 4 years in a prison, she gets out, determined to apologize to the man she ruined, but ends up not telling him, instead helping him recover. In the meantime, she wins a ticket to fly out to Earth 2, as it is now called. I won't continue the story from here, you should see it for yourself.

The main point I liked and what actually attracted me to this movie was the plot, the story itself. It was very appealing for me and I liked the idea of another earth, another me out there. All in all, the script was rather good, what bugged me was the directing! It was bad, it was amateurish, it looked like a 2nd year student film. Mike Cahill, I don't know you, but next time try harder. Update: Mike Cahill won the Special Jury Prize at Sundance for this movie- really? Is it just me?maybe I just can't appreciate it.

If you get past all of the bad camera shots, it is a rather beautiful movie. I loved the ticking scene and the violin-saw one, they  were lovely. Also, the recurring theme of dust just flowing in air was beautifully shot (for a change). Brit Marling, as an actress (she is also the scriptwriter and producer of this movie) was very good and has a certain distinct quality about her- she sometimes reminded me of Elizabeth Olsen! We should definitely watch out for this girl, she is a triple threat- actress, scriptwriter and producer- her new movie, The East, has a promising cast and an interesting synopsis!

To wrap up things, it was a great idea, but poorly made. Maybe if they would have brought in a more experienced director or a different cinematographer, this movies would have been a succes. But, still, a very good try! It shouldn't be on the top of your list, but if you get around to it, give it a go!
Posted by Diana at 8:39 AM