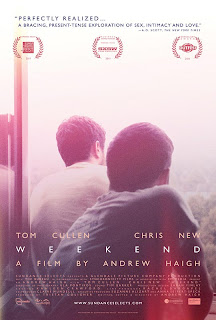 Weekend is probably one of the best British movie that was released in 2011. It tells the bittersweet story of two men who end up sleeping together, after a drunken night spent in a gay club, but decide to continue their  little fling, as more emotions and feelings come to surface.

Written, edited and directed by Andrew Haigh, this movie is simple in storyline, yet complex in his characters and speaks volumes on gay relationships and how they are perceived in today's world; but, at the end of the day, it's a romance, a love story between two men, told in a beautiful, touching, realistic way and you can't stop being attached to them and caring for both at the end of the film.

The two male leads, Tom Cullen and Chris New, deliver great performances and have perfect chemistry, which can be hard, considering it is a gay relationship- their interaction, paired with realistic dialogue, makes you believe every second of the time spent together. I don't know if the two actors are gay in real life, but if they aren't, more props to them- the film features at least 2 rather explicit sex scenes and I guess it was a delicate, strange situation to be in for any actor. Tom Cullen plays Russell, a sweet, shy, introvert lifeguard who doesn't like to talk about his sexuality and is too kind; Chris New is Glen, an outspoken art student who is an advocate for gay rights and believes America is the answer. You might think you have them figured out, but one of the best things about the story is to see how their character develop and, more than that, you get to learn more about their past and how it influenced the present. It's very interesting.

I liked the fact that Haigh tried to make things as normal and real as they could get, because the viewers were able to see the whole romance-love story thing happen for gay people, and I think that is more interesting and somehow, it has a bigger impact on viewer. Maybe because of the topic, maybe because it involves two people of the same sex, or just maybe because there aren't too many films portraying gay love- not like this, anyway. Yes, there was dirty talk, it had sex, drugs and alcohol were involved, and it can shocking and disturbing for some, but it was about more than that.

One of the most  interesting scenes happen in Russell's living room, after the second night spent together, when the two have a serious discussion: first, they talk about the gay culture and how they are perceived in the world, and after, they share their stories and feelings, but mostly, they realize they see and want different things from their life. For some, that will be boring, but it maintained my interest, and I loved the fact that you could feel what they were going through and all of their love, desperation, frustration was transmitted through the movie screen into people's minds and souls.

The ending was not typical and that made it ten times better for me. It was bittersweet and sad.

I don't know your opinions on gay relationships and I don't know if you like simple, character-driven movies, but if you do, you should definitely see this movie! I personally loved it!