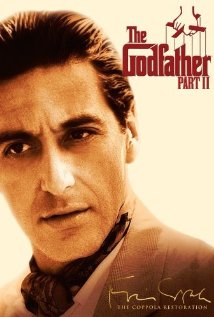 I got many positive comments on my last post about the second installment, all urging me to see it, so I guess it's safe to say I had high expectations going into "The Godfather II". It didn't meet them, but it was still a damn good movie.

First thing I noticed was that it had a 3 hour 22 minutes running time (that's a bit too much, isn't it?). Second thing: when Al Pacino showed up on the screen, I said to myself "hmm... he looks younger in this movie, that's weird".

Moving on to the actual film, the script, written again by Mario Puzo and Francis Ford Coppola, takes us through the past and the present of the Corleone family, by mixing young Vito's story (early 1900s) with the evolution of Michael in the 1950s- intrigue, in the present, rise of the king, in the past. The script still bothered me, this time by sometimes making too sudden transitions from 1900s to 1950s or not properly explaining the situation or at least showing the year they were in- that was tricky for me when it came to the kids, as they go back and forth between some years in young Vito's life and I don't know which kid is who....I think. See, still confused!

Although it didn't have as many great moments as the first one, my favorite ones of the second  installment were the following scene (when young Vito decides to resolve the local thug situation and goes after him, following his route home from the roof) and the Kay & Michael hotel part, where she finally confronts him.

As for the characters, there were a lot of new additions to this one and it was hard to follow at times. The returning cast (Al Pacino, Robert Duvall, Diane Keaton) was very good, but I thought the actors blended in too much and lost some of their magic and conviction- the only ones that stood out were Talia Shire and John Cazale (Connie and Fredo).

Interestingly enough, in my opinion, the flashbacks were much appealing in every way (cinematography, acting, music etc) than the curent situation, and I was floored by Robert de Niro's performance and appeareance in this movie (*insert girlie comment here: he looks hot and he reminds me of Ryan Gosling somehow. end of comment*). Acting wise and more, if there was a De Niro- Pacino match for Godfather II, the first would win hands down, just for his scary coolness, imense talent and undeniable charisma. Yes, Al Pacino, has that, too, but Robert exceeds it; I was surprised, but not shocked, to learn that he won an Oscar for his portrayal of young Vito Corleone.

All in all, I can't really say too much about it; I still think the first part of the trilogy was better, but part II rose to the ocassion and offered a great show, as well.

Should I watch part III? I probably will, just to know how the story ends and see what happens with Tom Hagen and Connie (my favorite characters)
Posted by Diana at 2:05 PM