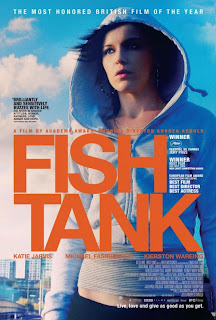 Fish Tank is a 2009 British film written and produced by a brilliant individual called Andrea Arnold. It takes you through the life of Mia (Katie Jarvis), a 15 year old with a big mouth and a bad temper, who likes to dance. Her ordinary life changes when Connor (Michael Fassbender) comes into the picture, as he becomes her mother's boyfriend. The man, unknownly, changes their life, in a way, as he becomes a father figure and husband for a short period....and in Mia's case, maybe something more. I'll try to be spoiler free, as I usually tend to give out important details, although I don't do it intentionally.

I would describe this film to be...British. I don't know how to properly explain it, but it has that feeling, that look, and of course, the language that immediately reminds you of the UK. In some cases, I was actually put off by the extreme behavior and language of Mia, Tyler (her sister) and their mother- I couldn't help asking myself "Is this considered normal in some parts of London or UK? do 10 year-olds really smoke and swear worse than a 40 year old?"

Anyway, that was probably one of the very few weak points of Fish Tank. Besides that aspect, which might be just a thing of perspective and personal belief, everything else was quite remarkable and beautiful.

80% of the cinematography was just wonderful (the remaining 20% are negative just because of some shaky camera shots that annoyed me); I especially loved the slow motion moments, like the wind blowing the shirts away, or Mia being undressed. My favorite scene happens around the middle to the end of the movie, when Mia shows Michael Connor her audition dance- I loved the lighting, the music, her innocence and the performances. What happened after? well, that was a bit shocking- I thought he was just the father figure she needed in her life, but I guess he had different feelings for her, after all. That scene went up and down for me: at first, I liked the fact that she let her guard down and finally opened herself to Connor; when he made her move on her, I was shocked, but found the continuation to be quite erotic, which again, made me feel bad, because what was happening wasn't right (maybe that was just the Fassy effect, he is one sexy man).

Another thing I was surprised by were some the directions Andrea Arnold took when it came down to the script. First of all, although I do like Harry Treadway (he was great in Control, too), I think his storyline was pretty useless, except for, of course, the end- sometimes, unnecessary characters or actions in a movie bug me. Second of all, I was pretty shocked and didn't quite understand Mia's choice of action when she found out the truth about Connor- I know she was hurt and trying to get back him in way or another, but that? it was a rash decision that didn't got her anywhere. Yes, I know it's a normal reaction and that was the first thing she thought of doing, still...

But then again, that didn't put me off. I still think it is a wonderful coming-of-age movie; yes, it is more raw and extreme than most, but it has a similar effect on the audience and on the characters. The end is bittersweet, and I can't really say she has evolved or grown to be a better person, but at least she has changed and even matured, a little. What will happen to her? Is she going to go to school or get a proper job? I don't think so, but at least she got something out from this whole experience.

Overall, I though Fish Tank was a solid movie, with good performances by Fassbender and Jarvis and well- written and directed by Andrea Arnold [ Jury Prize winner in Cannes for FT in 2010, and she won an Oscar for her short film, Wasp, in 2003,  which I saw in a festival years ago (it has a very similar vibe to Fish Tank, you should check it out, maybe on youtube), and I will definitely watch Wuthering Heights soon, as well!]  The Brits have done it again!