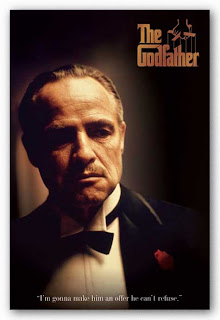 I think it's safe to say The Godfather is a masterpiece of cinema. The film, directed by Francis Ford Coppola and based on a novel of Mario Puzzi, tells the story of the Corleone family and its struggles in the mafia world. It features Marlon Brando, in a role of a lifetime, and then-youngsters Al Pacino and Robert Duvall, in an almost three hours epic movie that has everything- love, action, family, betrayal, violence and more.

The first scene is memorable, as the camera slowly goes from tight to wide shot (I hope I got the terminology right), while we learn the tale of a man seeking justice at the house of Don Corleone, the Godfather, the head of a mafia family, who's daughter is getting married in that day. During the first 20-25 minutes, we are introduced to the characters and we can observe the dynamic of the relationships- the 4 sons, the spoiled girl, the guests, the employees etc.

There were so many amazing scenes, especially in the first half (the wedding, the horse head in the bed, the shooting). Two of my favorite moments in this movie were the interludes, like I like to call them: the first one was exactly after Michael left the restaurant and ran for Sicilia- the mix of the piano music with the headlines, showing us what was happening in the mafia world, and the second one, at the end- the intertwining scenes of the baptisms and the killings; both genius! Francis Ford Coppola's direction is exemplary, as he mixes the traditional with the unconventional, resorting to some odd shots that showcase some particular moment in a better way.

The acting, and therefore, the casting, were perfect. I thought the attitude of the mobsters was right on point- not too much or too little; it was believable. The two standouts are, of course, Marlon Brando and Al Pacino, as father and son, but I was also pleasantly surprised by Robert Duvall and James Caan (I didn't even remembered they were in it, shame on me).

Although it is a very well told story and has interesting characters, I thought the script and the storyline were the weak link for this movie. There were some small plot holes along the way: Kay surrendering so easy to Michael after he comes back, and his rather quickly succession to the "throne" of the family, especially when it comes to his character- he changed significantly, in a very sudden way, and I was a little taken back by it. Plus, the length of the film allowed many things to happen, maybe a little too much in my opinion.

But those were minor things that did not interfere with my general thought on it. "The Godfather" is truly spectacular and as it has the title of a classic, you should see it!

(P.S. Don't worry, I saw the trilogy almost ten years ago, but I forgot almost everything about it, so I decided to revisit it now. Part II post coming soon)