Yesterday I had the pleasure of attending a free event organized by the Sundance London Film Festival for future filmamakers. 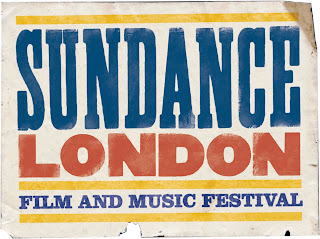 It started with a discussion/speech with Trevor Groth, director of programming and Sundance director John Cooper about the festival, its origin and what they are looking for in the submissions.

Random notes:
- 5700 shorts submitted for 80 slots
- storylines are one of the the most important parts of a movie, crucial to its success
- festivals are always looking for comedies, because they are very programmable, and especially since the US independent films tend to be on the serious side of things
- having stars doesn't help you get your film in the festival
- when asked how they choose films for the competition, Cooper says he always answers with "An educated instinct", and adds that they all look for the emotional connection to the story or the characters- if they are moved by it, the project is good

The short Q&A was followed by the viewing of some of the short films that can be seen during this year's festival- the winner of the competition, plus another two british ones and an american one, all wonderful in their own way.

First up was the winner of Sundance 2012 for Short Film competition- Extranjero tells the story of an immigrant who tries to survive in a foreign city, but somehow finds himself in a strange situation whenever things get rough. See the short in the Vimeo link below
http://vimeo.com/35598769

After the viewing, the two directors who collectively call themselves The Queen (Daniel Lumb and Crinan Campbell) answered some audience questions. Initially, the two were just friends and flatmates, but they would always help each other out in shootings, so after a while they said "why not work together?". They talked about technical details (words like Canon 7 and 5 and rigs were thrown, but don't ask me, I'm not an expert), and admitted to having an editing perspective, as they like to cut out all unnecessary things from a movie. Apparently, the idea of the film came from an image they had stuck in their head of a floating shell suit, so they decided to use it and figure out a narrative to go along with it.

The second short was Robots of Brixton, a visually beautiful film made by Kibwe Tavares, who not only directed it, but also made the animations, lighting, texturing and so on. Interesting tibdit: this was, if I understood corectly, his final project for his Architecture degree. It follows the trials and tribulations of young robots surviving at the sharp end of inner city lfe- full synopsis in the link below, together with the video:
http://vimeo.com/25092596

The third one was The Arm, an US selection and finalist of Sundance 2012- a sweet, funny, but still awkward short about social pressure. I couldn't find the actual film, but this article/interview is very interesting, especially from a filmmakers point of view
http://www.allaboutindiefilmmaking.com/2012/01/road-to-sundance-arm-directed-by-brie.html

The last one was Don't Hug Me, I'm Scared, a funny animated feature about the advantages and disadvantages of being creative. After the viewing, the two directors, Becky Sloan and Joseph Pelling, quietly talked about the film and the group they are part of, This is it collective. Video link below
http://vimeo.com/27003856

Before wrapping up things, Trevor invited on stage the director and the producer of Luv, a feature film competitor, to talk about the movie and the road to its completion. Sheldon, the director, was humble and supportive and talked us through the process of writing the story (about 3 years), making the movie (another 8 years), finding the right cast and how he got the money to do it (answer: 5 private investors, including athlets and a retired cop). He also gave the best quote of the day, for me at least:
"I have no fear of failure; I have a fear of woulda-shoulda-coulda"

After the obligatory "Thank you, see you around, please go see the movies", everyone rushed to talk to the guests, and I had the chance to have a brief chat with Trevor, the director of programming. I'm always happy and relieved to see people like him, with experience and recognition, willing to talk and help every aspiring filmmaker out there- I know it is his job, but I still admire the gesture.

If you have the chance, you should take a trip to the O2 and see some movies at the Sundance London Film Festival- I hear Liberal Arts is very good, and The Queen of Versailles, 2 days in New York and Nobody Walks look interesting.

If you watched the short films I gave you the links for, please let me know which one you liked best and why?
Posted by Diana at 10:26 AM