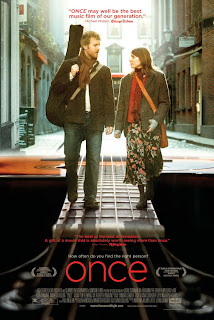 Written and directed by John Carney, "Once" is an Irish movie which tells the story of a man and a woman who share a love for music and their adventures into the recording business. What drove me to this film was the one of the songs of the soundtrack, "Falling slowly"- it won an Oscar and is always present in my playlist- so simple, sweet, yet powerful and melancholic; I love it!

Glen Hansard and Marketa Irgleva play the two main characters, with no names attributed, apparently- he is a busker and a part-time Hoover vacuums fixer, while she's an energetic immigrant who scrapes by everyday by selling flowers, whilst trying to feed her daughter and her mother.

The Guy, the lead, is just a man who can't give up the past and his cheating ex-girlfriend, constantly being held back by his obsession over his lost love who now lives in London; he even describes himself to the Girl as being "a broken-hearted Hoover fixer sucker guy". The movie is about his journey into the music business and it showcases his talents-he undoubtedly has a great voice, but honestly it is something you can see everyone, on every corner and on reality TV shows- his songs are nice, his voice is growly, but I didn't found anything special about him- would I buy his record? I'm not sure.

The Girl is a young woman who left everything behind in Chezch Republic and came to Dublin to provide a better future for her family. She is an interesting character, but very undeveloped in my opinion and rather unreadable- I couldn't actually connect with her, not even when she was around her daughter.

Their chemistry is palpable and you hold a hope in your mind that he forgets his bitter ex girlfriend and settles down with the Girl, but it never happens, and that's probably for the best- it avoids romantic comedies clichees. It's more than friendship, but it's not quite love, either.

What I admired and enjoyed about this particular script were the occasionally funny, original, yet seemingly real scenes; for example, the opening scene, where the Guy chases a heroin-addicted man who stole the money he got from busking; or his interaction with the Girl, and her brave determination to meet him again, after their brief discussion. I honestly laughed when the small loans manager tells them, at one point, "I wanna show you something" and at what happens afterwards.

It spiked in some moments, spoiling us with sweet moments and great music, but I was mostly underwhelmed by the amateur acting and the failure to make me feel excitement- the only scene that made my blood boil, to say so, was the one in which they played Falling Slowly, my song, and even that was rather bland.

"Once" seems like a raw, undeveloped feature, but it has some great moments- I guess the documentary feel to it, the amateur camera pinpoints the direction of where they wanted to take it, and I get it. Overall, I liked it, but it's not very memorable and the Girl just didn't do it for me.